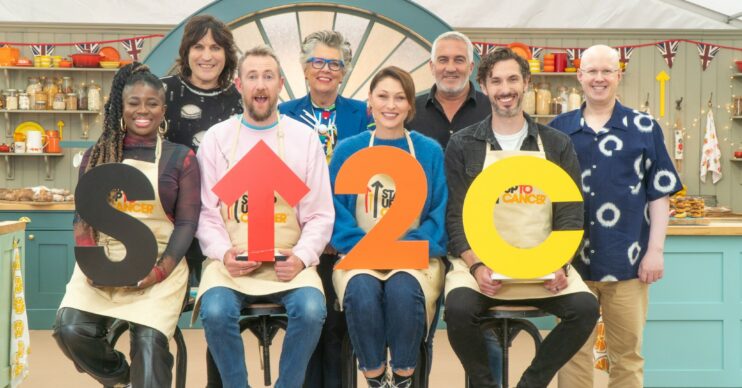 The Great Celebrity Bake Off is back!

The Great Celebrity Bake Off for Stand Up To Cancer is back again this year.

This season, another great line-up of celebrities will be putting their baking skills to the test inside Britain’s most iconic tent.

So who’s donning an apron this year?

Here’s what we know about this season’s exciting celebrity line-up.

Blake is best known for playing the hilarious Neil Sutherland in the E4 series.

He has also starred in other comedies such as Way to Go, Him & Her and The Bleak Old Shop of Stuff.

When asked what his strengths and weaknesses in baking are, Blake said: “Oh god. It’s just all weaknesses really. A complete lack of knowledge and experience.”

Alex Horne is the creator of the award-winning series Taskmaster, in which he also stars as the assistant.

Alex is also the host and bandleader of his comedic band, The Horne Section.

Talking about the show, Alex said: “I cannot bake. I have never baked. My children can bake better than me.

“But I saw this as an opportunity to learn a new craft and possibly fashion a new career. I’m only doing so I can release a new cookbook. That is not true. I cannot bake.”

Emma is famous for her television and radio work with a load of popular channels including the BBC, ITV and Heart FM.

She has also presented the reality TV series Big Brother.

Emma told Channel 4 that bread and pastry would be the worst thing she’d be asked to make on the show.

She said: “Bread, I think. Bread would be a shocker. Meringue would be pretty tricky.

“Some kind of pastry. All things that are notoriously difficult. I’ve never made a pastry, I’ve just bought it.”

Clara Amfo is a television and radio presenter.

The star is mainly known for her work on BBC Radio 1.

She also competed in the eighteenth series of Strictly Come Dancing alongside her partner Aljaž Škorjanec.

So she’s no stranger to a bit of competition!

Clara also confessed to Channel 4 that she’s got a bit of a sweet tooth.

She said: “Oh I’ve got a really sweet tooth. I hate the fact that I love sugar so much.

“Actually no I don’t. I love loving sugar.”

Mo Farah has won 10 championship gold medals which makes him the most successful long distance track runner in history.

He may have mastered the track, but will he be able to master the pressures of working in a kitchen?

Annie Macmanus aka Annie Mac is an Irish DJ.

The star played around the world in various locations like Ibiza.

She’s also hosted a range of shows on BBC Radio 1.

Ben Miller is a famous actor who’s starred in many hit movies like Johnny English and Paddington.

Many of you may also recognise him from playing gambler addict Lord Featherington in the Bridgerton series.

Now Ben has decided to take on the challenge the Great British Celebrity Bake Off.

Laura Whitmore is a model and television presenter.

She started out as a video jockey for MTV but now she’s better known for presenting shows like Survival of The Fittest and Love Island.

Speaking a head of the competition the star revealed that there are some similarities between Love Island and Bake Off.

She said: “I think they’re both entertainment shows, and they both involve a lot of challenges, and a lot of tasty items so actually there are many similarities- who would’ve thought it?”

Ed announced the news on his Instagram saying: “As long as I don’t become a meme, I’ll be happy. @britishbakeoff for @su2cuk. Coming soon.”

Tracy-Ann Oberman is widely known for her roles including Chrissie Watts in EastEnders and Auntie Val in Channel 4’s Friday Night Dinner.

We’re excited to see the actress try her best at baking to raise money for charity!

Ellie Goulding is an award-winning singer-songwriter.

You’ve definitely heard her songs at least once on the radio!

She is known for her classics like Love Me Like You Do, Still Falling For You and Burn.

Sophie Morgan is a TV presenter and disability advocate.

The TV personality has hosted coverage for the Paralympic games for Channel 4.

We’re looking forward to see her give it her all in the famous Bake Off tent.

Elliot John Gleave aka Example is a British musician and rapper.

The star has written many hits in the past including Kickstart and Changed the Way You Kissed Me.

But will his baking be as successful as his songs?

He is also known for his television appearances in programmes such as The Choir.

Motsi Mabuse is a judge on Strictly Come Dancing, who originally appeared

The dancer will be trading her sparkly dresses for an apron in the this year’s series of the Great Celebrity Bake Off.

Mawaan Rizwan is an actor and comedian who began his career as a Youtuber.

Now, he stars in the comedy series Two Weeks to Live and appears in shows like Taskmaster and Jonathan Ross’ Comedy Club.

Ruby Wax is an American actress who co-starred in the ITV sitcom Girls on Top.

Fans are intrigued to see how well the actress will do in the Great British Bake Off kitchen.

He also appears in the 2020 edition of Soccer Aid.

If the star is anything like his friend KSI, who was on the show last year, we’re all in for a treat.

Surprise! Matt Lucas is also joining the line up this year.

Bake Off presenter Matt Lucas has decided to fill in for a missing baker and have a go at competing this year.

We’re excited to see how well he will do under the scrutiny of his fellow co stars Prue Leith, Paul Hollywood and Noel Fielding.

Talking about swapping sides and becoming a participant, Matt said: “I was forced to bake by my bosses at the last minute when one of the bakers became unavailable.

“I can’t tell you how happy I was that my humiliation was caught on camera.”

Are you looking forward to The Great Celebrity Bake Off? Head to our Facebook page @EntertainmentDailyFix and let us know.