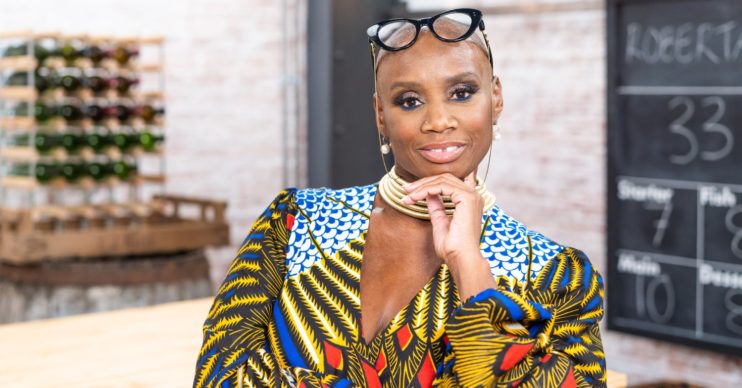 The TV star actually started out as a singer!

Great British Menu continues on BBC Two this week (Thursday March 25 2021) with host Andi Oliver at the centre – but how did she become famous?

And who is her famous daughter?

Here’s everything you need to know about the TV personality.

Read more: MasterChef UK: What is the prize for winning? What are champs Saliha and Kenny up to now?

Great British Menu Andi Oliver: What is she famous for?

Andi Oliver – short for Andrea – is a British chef, broadcaster, actress and singer.

She actually started her performing career in a band performing to live audiences.

The singer later moved into presenting, and often incorporated her love of cooking.

She used to co-host the Channel 4 television show Baadasss TV alongside Ice-T.

Andi frequently appears on the BBC World Service and the BBC’s annual coverage of Glastonbury Festival.

The TV personality, known for her flamboyant sense of style, started presenting a six-part cookery show Neneh and Andi Dish it Up.

The BBC Two series began in April 2007, and saw Andi team up with her good friend, the ‘Buffalo Stance’ singer Neneh Cherry.

Since then, Andi has hosted the Truth About Food, The Big Eat and BBC’s Christmas Kitchen with Matt Tebbutt, among many others.

Andi also acts, appearing in the 2009 drama No. 1 Ladies Detective Agency, set in Botswana, and in Trakked, Take Me and How to Build a Girl.

In 2017, she replaced Prue Leith as permanent judge on The Great British Menu with Matthew Fort and Oliver Peyton.

When she is not broadcasting, Andi co-runs Andi’s Restaurant in London with Kelly Miles.

Great British Menu Andi Oliver: What band was she in?

Andi is a former member of the band Rip Rig + Panic.

One of their notable TV appearances came when they performed in an episode of the cult comedy show The Young Ones.

After 1983, Oliver became involved in Kalimba, an African inspired band.

In 1990 she joined forces with her brother, forming the Mighty Hog.

How old is Andi Oliver?

Both Andi’s parents were born in Antigua – her dad joined the RAF and her mum was a primary school teacher.

She travelled extensively in her youth, thanks to her dad’s career.

He was the bass player in Rip, Rig + Panic and wrote Wishing Well for Terence Trent D’Arby.

Andi Oliver met her partner Garfield Hacknett over 20 years ago when she worked at The Globe speakeasy in Shoreditch.

He works as a cultural facilitator and manages the band The Feds.

The pair bonded over their mutual hatred of camping.

They live in Clapton and love hanging out in Millfields Park with a music system and good food.

Who is Andi Oliver’s famous daughter?

Andi was a single mum to Miquita, now 36, and times were sometimes very hard.

She has said: “It has always been up and down and that seems normal to me.

“Everyone thinks because they see you on telly you must be rich, but I’ve never been driven by money.”

The mother and daughter duo took part in Eight Go Rallying: The Road to Saigon in 2018.

With a group of celebs, they competed in a 2,500 miles rally around South East Asia.

Episode two of series 16 focuses on main and dessert courses.

Among the mains are a venison dish in honour of the only British woman to win a Nobel prize in science, and a homage to West Midlands manufacturing.

The desserts include two layered chocolate dishes – one using edible paper as a tribute to Samuel Johnson, the other featuring an ingenious chocolate cross-section of a road inspired by the invention of smooth tarmac.

But whose inventions in the kitchen will veteran judge Lisa Goodwin-Allen prefer?