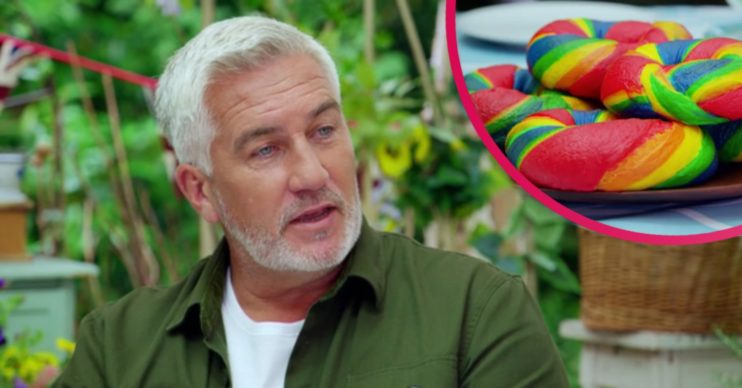 The Channel 4 star was hit with 18 complaints

Great British Bake Off judge Paul Hollywood is the latest star to spark Ofcom complaints after he stated rainbow-coloured bagels represent the NHS.

The 54-year-old baker failed to mention the significance of the rainbow flag in the LGBTQ+ community while sampling bagels on the Channel 4 show.

Great British Bake Off: What did Paul Hollywood say?

During the Technical Challenge, the Bake Off contestants were tasked with making rainbow bagels.

While chatting with Prue about the meaning behind the rainbow, Paul said: “I think bagels are a great challenge when you’re making bread.

“You’ve got to boil them which is unusual.

“I think the rainbow colours for me, although it originated over in the States, I think it represents the NHS.”

The rainbow flag has been used as a celebration of the NHS and its frontline workers during the coronavirus pandemic.

According to the Mail Online, broadcast regulator Ofcom received 18 complaints over Paul’s comments.

At the time, fans of the show took to Twitter to voice their concerns.

One wrote: “Oof, @PaulHollywood saying on GBBO that rainbow bagels symbolise the NHS, rather than LGBTQIA+ made me feel a little uncomfy.”

A third added: “Paul Hollywood said make RAINBOW COLOURED BAGELS to represent the NHS?? Are you sure sir?”

Another stated: “Rainbow bagels make me think of Pride.”

GBBO’s Rowan only just scraped through last week. And in the latest episode, he struggled to impress judges Paul and Prue with his bagels, soda breads and showstopper.

Now, just three episodes in, a number of viewers are backing 31-year-old pharmacy worker Sura to win. Other names backed for the final are Marc, Hermine and Lottie.

GBBO continues on Tuesday (October 13) at 8pm on Channel 4