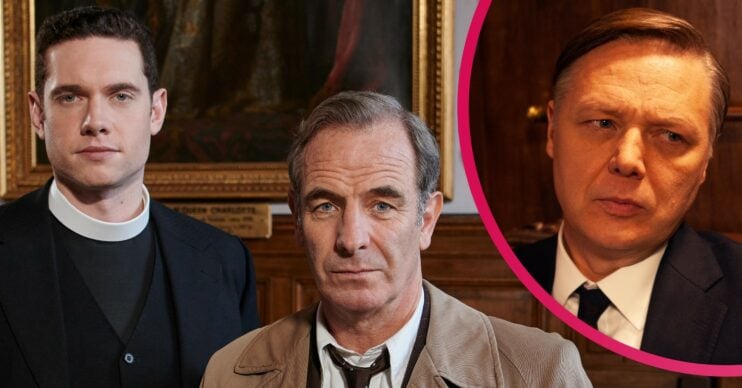 Get your cameo bingo card out!

Grantchester continues this week, and episode five has one of the most exciting cast line-ups for ages – including the amazing Shaun Dooley.

Here’s everything you need to know about the cast of Grantchester series eight, episode five.

Read more: Grantchester on ITV1: What year is sixth series of period drama set in?

Johnny is Geordie’s old army buddy, and the emergence of the old friend strains the partnership between Will and Geordie.

ITV tells us: “Will and Geordie’s friendship is tested when an old army buddy comes back into Geordie’s life.

“Johnny is a lawyer, representing the very people Geordie puts away.

“But the bond forged between them in a prison camp in Burma means Geordie is drawn to this morally grey character.

“Particularly when Will’s idealism starts looking like naivety, from a certain point of view.”

Producer Richard Cookson says: “Hints have been dropped about Geordie’s time as a POW in Burma since series two…

“So when Johnny walks back into his life, he doesn’t just stir up old memories – he dredges up an awful guilty secret too…”

Of course, TV fans will recognise Shaun Dooley from his most recent role as DCI Mike Braithwaite in Innocent.

He also portrayed Clive Tozer in It’s a Sin, Doug Tripp in The Stranger and Jeremiah Rawson in Gentleman Jack.

Shaun, 47, has also appeared in The Witcher, Doctor Who, Gunpowder, Jamestown, Broadchurch and DCI Banks.

We particularly loved him as Greg in Misfits.

The actor, 25, portrays a thief who stages an audacious robbery from a bank security van – and promptly gets involved in a punch-up with Will.

He’s also starred as Lester Large in The Large Family, Mr. Lovett in the Ministry of Curious Stuff and Mr Easter in Robbie Easter.

Most recently, he’s appeared in Scream Street and Cuckoo.

Of course, he also played Nigel Bates in BBC One soap EastEnders between 1992 and 1998.

The actor has also starred in Red Dwarf, The Kate Robbins Show, and The Young Ones.

Viewers know Chelsea – sister to Jill! – best for her role as Amy Wyatt in the ITV soap Emmerdale.

Byker Grove fans will remember Chelsea as Lucy in the children’s drama series.

Among the cast of Grantchester episode five are some old favourites and some new.

Of course, Robson Green and Tom Brittney portray Geordie Keating and Will Davenport.