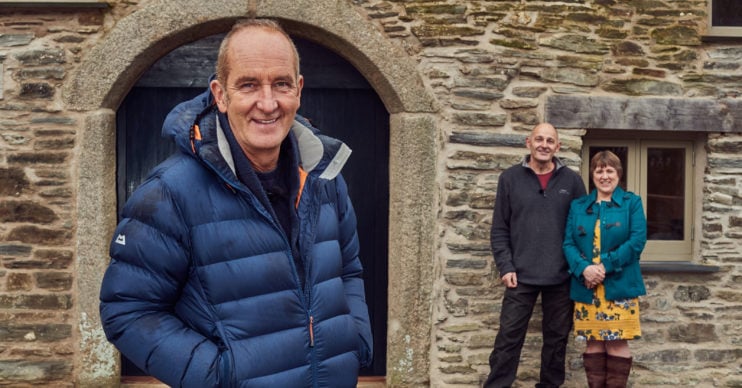 You tell him Leigh and Richard!

A Grand Designs couple who own a flour mill in Cornwall told host Kevin McCloud that they don’t “give a toss” what he thinks about their renovation.

In last night’s episode of the show (Wednesday February 3), couple Leigh and Richard converted the 17th-century mill into a three-bedroom house.

But in the face of criticism from Kevin, the couple hit back.

What happened to the flour mill couple on Grand Designs last night?

Kevin worried that the budget was too small to renovate a property of this size.

He said: “I feel my argument for conservative repair may never find a happy home within these walls.

“Leigh and Richard, weary and worn down, just want to get it finished.”

However, Kevin’s fears did not make much of an impact on the couple.

Leigh and Richard have bold ambitions for this building. Although they want to retain some of its original features and natural heritage, ultimately it has to be a family home.

It's a delicate balancing act between restoration and complete reinvention! #GrandDesigns pic.twitter.com/CazSEL5qEb

What did Leigh tell Kevin?

“We have saved and to be honest, I don’t think an outsider standing here is in a position to make a judgement and really l don’t give a toss what they think.”

Viewers of the show then chipped in with their own comments about the clash.

After all, it’s not often participants in the hit renovation show question Kevin’s wisdom and experience.

#granddesigns we thought Kevin was a bit mean to the couple who saved the mill in Cornwall.

One said: #granddesigns we thought Kevin was a bit mean to the couple who saved the mill in Cornwall.”

Another viewer said: “Go on Leigh! Tell Kevin you give no [bleep]”

However, one viewer – taking Kevin’s side – exclaimed: “Wow, talking [bleep] about Kevin while the cameras roll during the build you invited them onto? Basic [bleep].”

Leigh and Richard also won praise for their down-to-earth personalities.

One viewer wrote: “How on earth did Leigh and Richard get selected for Grand Designs.

“They are pretty normal people and well hinged, not the usual pretentious [bleep] the programme seems to be made up of. #granddesigns”