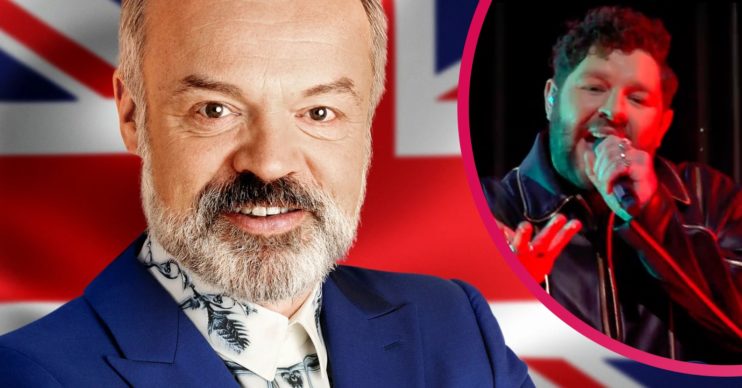 'I feel so sorry for James Newman,' telly host grumbled

The UK finished dead bottom on the scoreboard by the end of the Eurovision broadcast last night (Saturday May 22).

And despite Graham talking up James’ popularity with his fellow competitors, the final result was a humiliation for the UK.

Moments before James’ performance of Embers, Graham reeled off the 35-year-old’s accomplishments.

“But tonight he’s foraying into performance – and performing his own song.”

Pausing as if he knew a bad result could be on the way, Graham grasped: “[James has] been so popular backstage, he’s so… totally himself. He’s unguarded and genuine and such a happy guy.”

And it seems that Graham’s possible inklings were correct.

As the scores rolled in – but failed to roll in for James and the UK – Graham became uncomfortable with how badly James was beaten.

Graham continued: “Oh poor James. That isn’t… I mean, I say this often… but it really isn’t fair.

“That is not the worst song in the competition by a long shot.”

Furthermore, the UK failed to pick up any support from the public, as well as the judges.

Read more: Eurovision 2021: When did the UK last win? How many times have we won? Why do we keep losing?

Graham reflected: “It’s a disappointing show, obviously, for the UK.

“I mean, disappointing is putting it mildly… I’m trying to put a positive spin on it.

“But there is really no good in it. I feel so sorry for James.”

James, however, remained graceful in the face of defeat. Despite failing to attract a single point, he remained smiling whenever the camera turned to him.

Many UK viewers were also amused by the complete trouncing, with some joking there was no chance of a decent finish following Brexit.