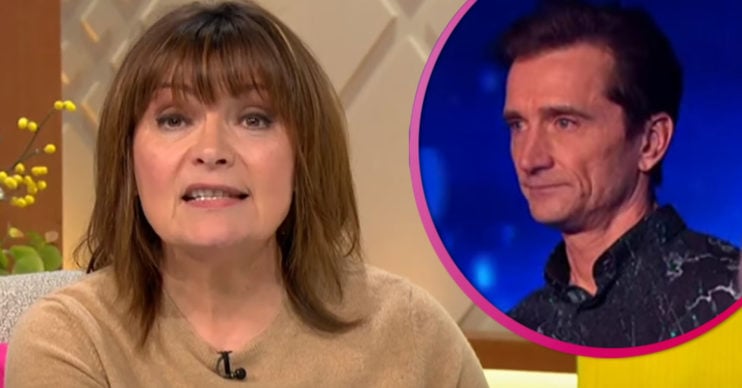 The former Olympic skier appeared on Monday’s programme after he was voted off Dancing On Ice last night (January 31).

Graham was discussing how he was once scaled a flag pole at the Olympics.

He then dropped the s-bomb.

What did Graham Bell say on Lorraine?

The star explained: “We’d always had a a bit of a party afterwards and we had a party in Sarajevo [in Bosnia and Herzegovina].

Read more: Dancing On Ice: Graham Bell was ‘robbed’ after being voted off, say viewers

“I was kind of enjoying myself and climbing up a flag pole and was untying the flag and all of my mates down the bottom, who weren’t, I thought they were down there.

“I looked down and they’d gone and been replaced by armed police.”

“And the fella took me back to the Olympic village in the back of a police car. But they let me keep the flag.”

At the end of the interview, Lorraine said: “Sorry for that wee naughty word that slipped out.”

One person wrote: “Just turned on my TV to Graham Bell saying a swear word on Lorraine.”

Another said: “Oh no someone said a swear word on #Lorraine.”

It comes after Graham was voted off Dancing On Ice last night alongside his professional partner Karina Manta.

Graham said: “I felt like we’ve got a lot more, technical skating and good skating, but hey-ho.

“I think I will use [the skating] in the future. I’m not going to quit skating.”

Viewers were divided, with many saying Graham should have stayed over fellow contestant Rebekah Vardy.

Do you think Graham should have left? Leave us a comment on our Facebook page @EntertainmentDailyFix and let us know.