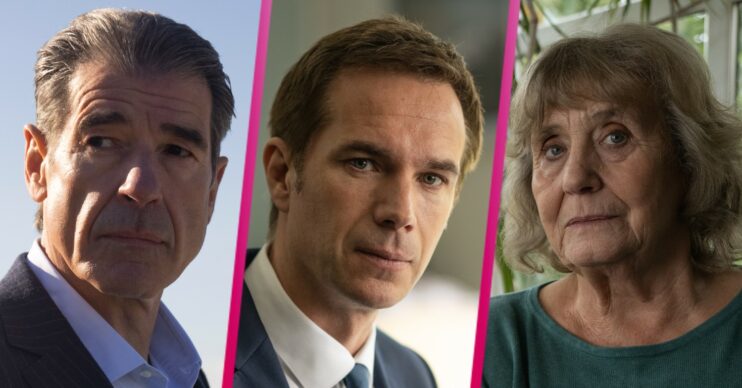 Grace continues on ITV1 with the episode entitled Dead Man’s Footsteps – and there are some very famous names in the cast.

Amongst the familiar faces are two soap actors, including the actor who played Matthew Jackson in EastEnders.

Here’s all the guest cast in the Grace episode Dead Man’s Footsteps.

Who plays Sean Klinger in the cast of Grace episode Dead Man’s Shoes?

The actor should be very familiar to TV fans.

His breakthrough role was as Matthew Jackson in the BBC soap Easties.

After leaving Walford, Steven portrayed Alan Enstone in Rumble, and Igor in Married With Children.

Then we won another big role – as Supt. Tom Chandler in The Bill.

Steven went on to play Dr. Jack Ford in Doctors, and Terry Fallon in two episodes of Silent Witness, among many other roles as a jobbing actor.

Most recently, Steven, 61, has portrayed Russell Hardwick in Brassic, John Monkham in All Creatures Great and Small, and Anton Reichmann in Cockney and Scouse.

Who was Steven Hartley’s character in the cast of EastEnders?

Steven Hartley played Matthew Jackson in EastEnders between 1988 and 1989 – the early years!

Matthew Jackson was the manager of the local music store, and introduced as the love interest for social worker, Carmel Roberts.

Matthew’s storyline included being estranged from his real parents after being abandoned and fostered.

He was also part of a race relations plot, as Carmel’s brother, Darren Roberts , objected to his sister dating a white man.

Matthew and Carmel subsequently married, but he soon showed his true colours as a bully and abuser.

Carmel eventually wised up, and ended their relationship.

She threw Matthew out and he left Walford in July 1989.

Cassian Pewe is an arrogant detective from the Met who seems intent on bringing Roy Grace down.

So much so, he wants to reopen the investigation into the disappearance of Roy’s wife Sandy.

He also portrayed Adam Cornwell in Red Election, Ludovico Sforza in Leonardo, and even played the voice of God in the 2021 film Warning.

The actor is perhaps most famous for playing Thomas Anson in Homeland, Edwin Jarvis in Agent Carter, and Duncan in Secret Diary of a Call Girl.

Broadchurch viewers will recognise him as sinister Lee Ashworth.

His film roles include Young Rufus Sixsmith in the 2012 film Cloud Atlas, Col. Winnant in Dunkirk, and Father Francis in Exorcist: The Beginning.

The veteran actor has been on our screens since 1982.

The jobbing actor has played dozens of TV characters, including Master of the Household in The Crown, Huish in Agatha Christie: Ordeal by Innocence and Doug Beale in Silent Witness.

She’s been acting for four decades, and is known for her role as Rita Blade in Harbour Lights, Eileen Murdoch in Waking the Dead, and Evelyn McArdle in Messiah: The Harrowing.

The actress played Hazel Betts in Five Days, Lena in The Take, and various roles in Holby City.

She recently played Sheila in the hard-hitting ITV drama Anne, and Anna Sidhu in Unforgotten.

The actress is also known for her portrayal of Clare in Baptiste, Helen Morris in Little Blue Boy, and Steph Farrow in Home Fires.

She’s also been in Vera, Downton Abbey and The Shadow Line.

Coronation Street fans might recognise her as Robyn, a role she played in 2005.

Grace on ITV1: What is Dead Man’s Footsteps about?

In the feature film Dead Man’s Footsteps, Grace investigates when skeletal remains are found in a Brighton storm drain.

The investigation takes Grace down a labyrinthine trail through the past, but it’s not only on the professional front that he is chasing ghosts.

Based on the Peter James’ novel of the same name.

What do you think of Grace so far? Leave us a comment on our Facebook page @EntertainmentDailyFix.