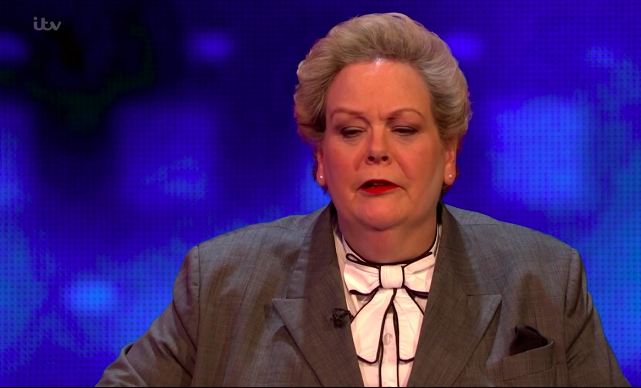 ‘Flustered’ Anne Hegerty loses out to ‘great team’ on The Chase

The Governess was no match for these three

Anne Hegerty, aka The Governess, is a big fan favourite on The Chase. And she’s definitely got a special place in the hearts of three people, at least.

They’re the lucky contestants on the Valentine’s Day episode. They beat The Governess in the final, nail-biting round and walked off with a total of £21,000 between them.

The first to compete was Ashton, aged 32 , a parliamentary assistant from Huntingdon. Ashton was canny enough not to let on which MP he worked for, reasoning that it would make half of the audience not want to root for him! He managed to deposit £7, 000 into the prize pot.

Luck was on Ashton’s side from the start, as he even got a question about politics.

Host Bradley Walsh quipped that Ashton was good at answering questions – better than most MPs!

Next to face The Governess was yoga teacher Jacqueline, 57,  from Yorkshire. One of Jacqueline’s questions was about yoga – what are the chances of that?

Anne pointed out that she and Jacqueline had something in common: “I’m like a yoga teacher,” she joked. “I find people bend over backwards to avoid me!”

Less successful was PhD student Sapphire, a student of quantum mechanics. Her dream to buy a piano was dashed by a fierce fightback from The Governess who said: “Until you got here, Brad thought quantum biology was a dishwasher tablet.”

Sapphire graciously admitted defeat, and said Anne was her hero.

Last to come to the board was Khurram, a 47-year-old college lecturer from Manchester.

“Can he add to the £15 grand?” asked Bradley as he went to a commercial break.

“Hell no!” Anne butted in, to laughs from the audience.

Read more: The Beast and a funeral director fight to the death!

When the three remaining contestants stepped up to the final round and answered an astonishing 23 questions in a row correctly, fans on Twitter started to predict the result. One said simply: “They’ve got this.”

As Anne struggled to get her questions right, another warned: “They could have this. Anne losing it!” 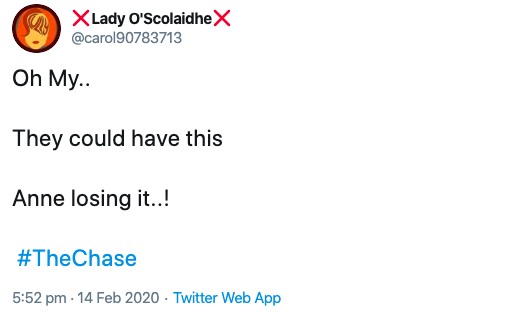 The contestants were victorious, taking away a cool £7,000 each! Viewers joined in the celebrations, saying

“Slaughtered… well played team, that’s made my weekend so far,” and another announced:  “Great win. Smashed it.”

But even though Anne wasn’t on top form tonight, there was still a lot of love for her on social media.

One fan gushed on Twitter: “Playing The Chase with Anne Hegerty is the best Valentine’s date I can ever hope for!”

Social media can get a reputation for meanness, so it’s lovely to see what a bunch of soppy old romantics The Chase viewers secretly are.

Do you think you could beat The Chaser? Head to our Facebook page @EntertainmentDailyFix and let us know.