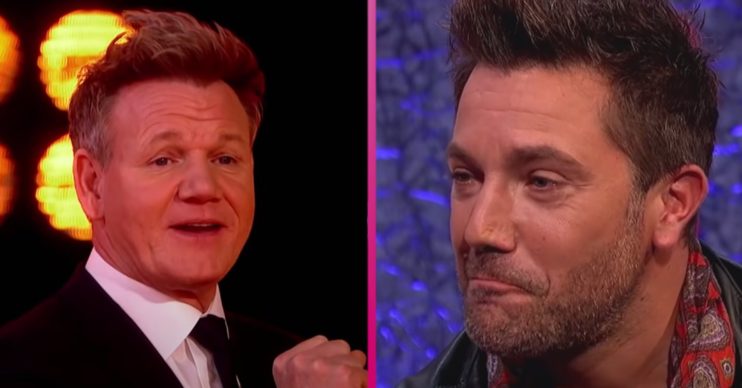 Fans can’t get enough of Gordon Ramsay’s taunting of Gino D’Acampo – and they won’t be disappointed when the roasting continues on Gordon’s new show Bank Balance.

Celebrity chef Gino joins his Road Trip pal on the BBC One show this evening (March 13).

But even though Gino is playing for Comic Relief along with his son Luciano, a preview shows Gordon isn’t very charitable himself and doesn’t take it easy on his mate.

What does Gordon Ramsay say to Gino D’Acampo?

As well as taking a dig at Gino’s cuisine and professional success – suggesting his “specialist subject” is not Michelin stars – Gordon also rebukes Gino for thinking he’d get an easy ride on the show.

“I don’t think we have a category on pasta shapes,” he intones, witheringly.

I look at that and I think of your frozen pizza.

Gordon goes on to tease Gino further by comparing a situation in the game unfavourably to the Italian star’s cooking.

Read more: How much is Bank Balance host Gordon Ramsay worth after lockdown dramas?

He adds with a cheeky swipe: “I look at that and I think of your frozen pizza.”

Gordon also takes the mickey while addressing Luci, Gino’s son and partner for the game show.

“Luci, you must be very proud of your father,” Gordon begins before turning the gag around.

“Have you ever met him?” Gordon continues to guffaws from Luci and what sounds like a studio audience.

Unable to stifle his giggles, Gordon harps on: “You’re way too smart! And way too tall! And way too good looking!”

Getting into his stride, the TV tough guy shrugs off protests from Gino to cement his mockery.

Well, well, well. Look who’s trying his hand at the #BankBalance Board….@Ginofantastico !! Will he beat the board for @comicrelief ? Find out tonight at 6 PM on @BBCOne pic.twitter.com/an7bDNpDWt

In response to hearing Luci can manage “the basics” of cooking, Gordon fired back: “So you’re following Dad’s footsteps!”

How have fans reacted?

Fans on Twitter lapped up the fooling around after Gordon shared the clip earlier today.

“Can’t wait for this 100% banter, I love it,” responded one social media user.

And a third agreed: “Ha ha ripping into him! Love this stuff, will defo watch.”