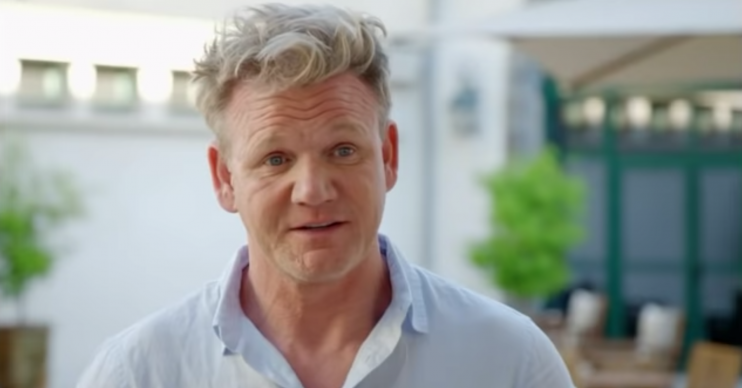 But was Gordon set up by his mum?

TV chef Gordon Ramsay gets more than he bargained for after winning a challenge during tonight’s Gordon, Gino and Fred: Road Trip.

The four-part ITV series sees Gordon and fellow celebs Fred Sirieix and Gino D’Acampo arrive in the US.

Their Road Trip journey will take them through California – where Gordon has a home in Los Angeles – and Arizona.

The foodies accept a challenge from Gordon to make their own burger. And Gordon’s mum, Helen, is also around to help judge who’s offering is tastiest.

But for every winner there must be a loser – and on Road Trip the loser must pay the price for failure.

Both Gino and Fred decided to theme their burgers around their home countries.

Get your clothes off and jump in the pool.

And so Gino cooks up an Italian burger and Fred whips up a French-inspired snack.

Gordon, however, keeps things traditional by basing his burger on an American recipe.

Ultimately, the Hell’s Kitchen star is picked out as the winner by his own mum.

And it seems she may have had good reason to choose him beyond the taste test of his burger.

As the victor, Gordon decides on the forfeit for the two Road Trip stars he has beaten.

He tells them: “You lost, big deal. Get your clothes off and jump in the pool.”

But there is no shaming Fred and Gino, who happily strip off and fling themselves into the water.

Gordon is left apologising for his Road Trip pals’ actions.

Helen, however, does not seem to be upset at receiving an eyeful.

She tells her son: “I enjoyed it, don’t worry about it.”

And it seems Helen may have been playing Gordon all along as she reveals she really didn’t mind seeing Fred and Gino in the buff!

She tells viewers: “I always knew I wanted to pick Gordon because I wanted to see them jump in the water with no clothes on.”

Luckily, although he and Gino were entirely in the nip, their privates were hidden from fans’ eyes with a pair of emojis.

“Whose idea was this? @gordongram @iamginodacampo #gordonginoandfred is on @itv on Thursday at 9pm,” he wrote in the caption.