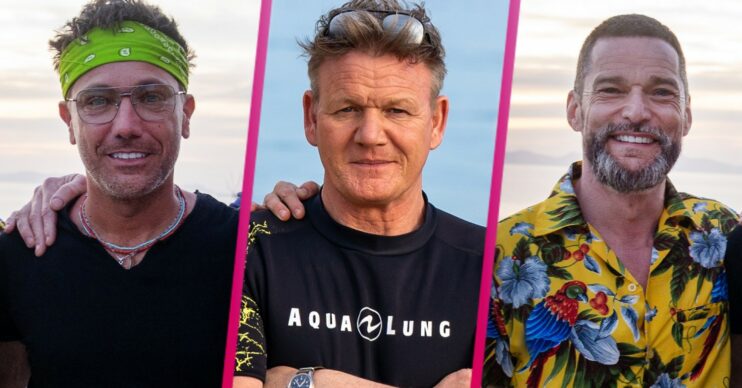 Gordon, Gino & Fred Go Greek! on ITV1: How many episodes are there and where do they visit?

And how tall ARE the foodie trio?

Gordon, Gino & Fred Go Greek! starts this week seeing the jammy trio explore more of the world for ITV1 – but how many episodes it it?

Where do they visit and how do they travel?

Here’s everything you need to know about the new series, starting on Monday September 27 2021.

Gordon, Gino & Fred Go Greek! on ITV1 – how many episodes is it?

The first episode Mamma Mia! airs on Monday September 2021 at 9pm on ITV1.

The second, called Clash of the Titans!, concludes the following Monday (October 4 2021) at the same time.

Where else have they travelled?

Gordon Ramsay, Gino D’Acampo and Fred Sirieix have been travelling the world together since 2018.

That year, they embarked on Gordon, Gino & Fred’s Road Trip taking in Italy, France and Scotland – each of their places of birth.

The newest adventure for the trio will take them to the islands of Greece in Gordon, Gino & Fred Go Greek!

Where do they visit in Gordon, Gino & Fred Go Greek! on ITV1?

This time, they’re island-hopping aboard a smart catamaran, hitting the beautiful Greek islands and historical city of Athens.

They also drive a tuk-tuk around the narrow streets of Mykonos, and dive for lobster off Crete.

In part one of two, the three chefs head off around Greece.

They plan to immerse themselves in the culinary traditions and spectacular landscape of the nation.

They begin by going lobster-diving and pastry-making in Crete.

Then they visit the hot springs of Santorini and move on to make traditional sausages in Mykonos.

The buddies are keen to learn more about the Mediterranean diet and how the country has one of the healthiest populations in the world.

Gordon, Gino & Fred Go Greek! episode one Mamma Mia! – where do they visit?

They begin their journey off the coast of Crete on a catamaran.

The trio go lobster diving and pastry making in Crete, before visiting the hot springs of Santorini and then moving on to make traditional sausages in Mykonos.

After sampling the lobster cooked by Gordon on the boat, they head to the ancient city of Chania where Fred has hired a tuk-tuk to show them the sights.

The trio head to a bakery to sample bougatsa, a local delicacy made from filo pastry and sheep’s cheese using a family recipe which is over 400-years-old.

Gordon, Gino and Fred meet the owner and his wife, Joanna, who is in the kitchen and is keen to show the boys how the bougatsa is made.

The pals then head to Santorini to take a mud bath in the island’s volcanic hot springs.

Next up, the guys sail around the Santorini coast to the picturesque village of Oia, to see its famous cliff-side whitewash houses and dome churches.

Finally, Gordon, Gino and Fred reach the magical party island of Mykonos, where they are back on the road travelling by tuk-tuk, on a mission to tickle their taste buds with a hugely popular local specialty – the Mykonos sausage.

Episode two Clash of the Titans

They get back on the road in a vintage VW campervan to visit the Greek capital of Athens, starting at the home of the first modern Olympics, the Panathenaic Stadium.

At a vineyard in Attica, they agree to help with spraying the vines, and cook up lamb chops, grilled asparagus, Greek cheese and vine leaves by the campfire.

The following morning, they go in search of the best Greek salad cocktail, at Clumssies bar, made with their very own Greek salad cordial.

Next on the agenda is the monasteries of Meteora.

Finally, Gordon, Gino and Fred go in search of truffles, one of the most sought after foods in the world.

How tall are Gordon, Gino and Fred? What are their heights?

As you can probably tell from watching the show, Gordon Ramsay is the tallest at 1.88cm – that’s six foot one inches in height.

Fred Sirieix is the second tallest at 178 centimetres, or five feet 10 inches.

Gino D’Acampo is the smallest in height out of the three, measuring 1.73m.

Are you a fan of Gordon, Gino and Fred as a trio? Leave us a comment on our Facebook page @EntertainmentDailyFix.