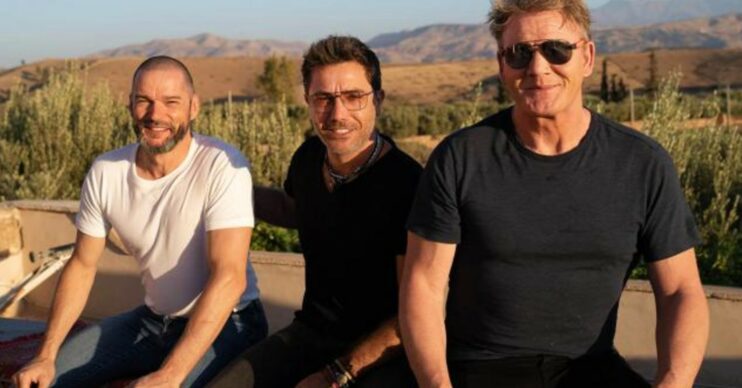 Gordon, Gino and Fred: Road Trip: All the latest on season 3 and 4

The mischevious boys are back on ITV later this year

Gordon, Gino and Fred: Road Trip is returning for season 3 this year and two more series after that.

The show follows beloved stars Gordon Ramsay, Gino D’Acampo and Fred Sirieix as they travel around the world.

Series 1 and 2 were a big hit with viewers, and fans can’t wait to have the three gents back on TV again.

When is Gordon, Gino and Fred: Road Trip out?

After two wildly successful seasons, ITV of course greenlit the show for a third.

Gordon, Gino and Fred: Road Trip series 3 will be released later this year.

ITV has yet to confirm a date, but the cast recently completed filming the next run.

There’s also a Christmas Special and further seasons in the works too for 2022 and 2023, so there will be no shortage of these three for the next few years.

Sadly, the show may look a little different when it does return.

There’s been no avoiding the little global pandemic we’ve all been hit with, and it’s impacted series three too.

“The landscape is still unsure when it comes to travel, so we are still working out where and when,” Gordon told Radio Times.

“But it will be the usual circus of me and Fred trying to find out about the food and culture whilst Gino completely clowns around causing mayhem wherever we go.”

Meanwhile, Fred hinted that the next season could feature some seriously outrageous moments.

“When we were in America [for the previous season], if we get away with what we’ve done, we can get away with murder next time,” he teased.

Opening up about where season 3 takes the boys, he added: “I can’t say where, but we’ve got the destination. We’re putting the trip together now and it’s looking pretty good, I have to say.”

In May, they were seen filming scenes together in Greece.

The group pictured wearing running gear and chatting intensely with a fitness instructor.

Is the first series and season 2 streaming online?

Gordon, Gino and Fred’s Road Trip – Season 1 and 2 are streaming on BritBox.

You can also buy them as a download on Apple iTunes and Google Play Movies.

Will you be watching the new series when it airs? Let us know on our Facebook page @EntertainmentDailyFix.