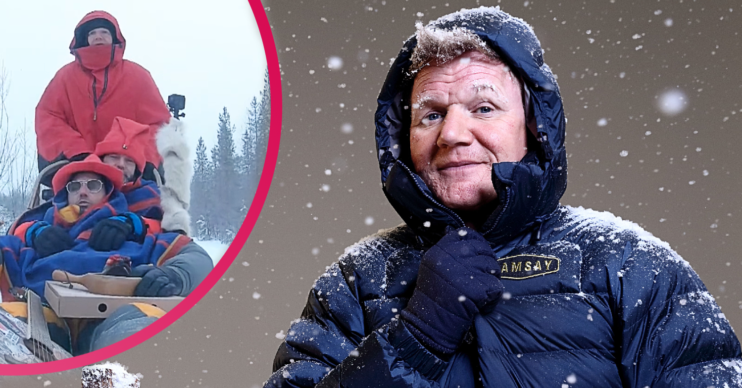 Gordon, Gino and Fred are seen almost crashing on a sledge in a new clip from their Road Trip Christmas special.

And judging by a new clip from the ITV show, there are a few hair-raising moments.

What is Gordon Gino and Fred Christmas special all about?

After Gino led them to the deserts of Morocco for last year’s mis-adventure, Gordon is determined that they celebrate the season properly this time.

So he has arranged a boys trip away before the madness of a family Christmas kicks in, to the ultimate winter wonderland and the official home of Santa.

What happens in the clip?

In the new clip, Gordon is driving a sledge pulled by Huskies.

“Remember Morocco last year, what you did to me at Christmas?” Gordon asks.

This is a proper Christmas. We’re in Lapland. Embrace it!

“This is a proper Christmas. We’re in Lapland. Embrace it!”

Sitting on the sledge are Gino and Fred and they’re not happy.

Gino constantly asks if Gordon knows where he’s going because he has promised his daughter he would personally deliver a letter to Santa.

Fred and Gino then complain about the cold.

And it’s then Gordon almost loses control of the sledge, almost careering into a snowy verge.

“Why can we not get a sleigh with a proper driver?” Gino asks.

The boys will be back

The Christmas special comes after news that the trio’s Road Trip series has been renewed by ITV for another three years.

Two new series will air in 2022 and 2023 while there will be a Christmas special in each year.

These will follow a third series and a festive special already set to air in 2021.

Gordon said: “Another three years with Gino and Fred, are you kidding me?

“Just joking. Who knew, when we headed out to Italy in the summer of 2018, I would find friends for life in Gino and Fred?”

Gordon, Gino and Fred: Desperately Seeking Santa is on ITV, on Wednesday December 16, at 9pm.