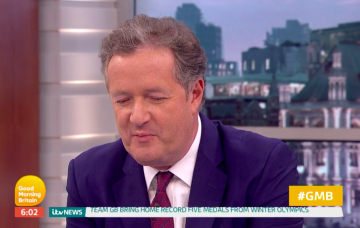 Oh how they've missed him

Welcome back Piers Morgan! Just minutes into the Good Morning Britain’s return to the morning show, after a two-week absence, he was already back to his offensive best, insulting co-stars Alex Beresford’s “blandness” and calling Charlotte Hawkins the “worst ever”.

As the entertainment show began, Piers, 52, immediately made a dig at Alex, 37, who was eliminated from Sunday night’s Dancing On Ice.

“A disgrace, spineless, a kid crying… oh, I thought it was about Alex”, he said, reading a report on Arsenal’s football game.

Presenter Susanna Reid quickly moved onto the weather presenter’s elimination from the ITV show after a skate-off against Love Island star Kem Cetinay.

Alex began: “I had an absolutely amazing time, eight weeks in…”

Piers interrupted him, saying: “Yeah whatever. Do you know what, before you give us a speech about how thrilled you are to have been dumped out before you even made it to the top three…”

Alex laughed it off, even when Piers said Alex had tried to re-position himself away from being “the weather guy”, by trying to join the main presenting team.

He added: “This desk is very much about showmanship.”

After explaining that he hadn’t been able to practise that week with his partner Brianne Delcourt, due to her illness, Alex went on: “I went out on a high, I could not have done any better…”

Piers interrupted him again, saying: “Well you could’ve done better, you could’ve won. So it’s not that much of a high, is it? You didn’t even win a bronze medal, and you know how I feel about bronze medals.”

Susanna 47, tried to break the tension, interjecting: “Isn’t it good to have him back!”

Piers asked Alex where he’d come in the competition and, sounding defensive, Alex told him: “So I finished fifth.”

“Right, so, ‘I went out on a high, I finished fifth’ – are not words you’ll ever hear from me,” Piers told him.

He then turned on fellow host, Charlotte Hawkins, who was on last year’s Strictly Come Dancing, dancing with recently axed Brendan Cole.

Charlotte looked a bit hurt, saying: “That’s not quite how I’d like to describe it, but thanks. You do it then.”

Alex hit back, saying: “At least I had the courage to take myself out of my comfort zone.”

Admitting Alex was a better skater than him, Piers added, referring to judge Jason Gardiner calling him bland: “Imagine if you’d been able to replace your inherent blandness, with my showmanship? I might’ve pulled you to victory.

“Just don’t be bland, just try. If anyone can sink it into blandness, it’s our man.”

Alex didn’t answer, instead turning to the camera to tell viewers about the “bitterly cold” weather.

The show, which returned this January after a four-year hiatus, featured a Disney theme this weekend.

Good Morning Britain airs weekdays at 6am on ITV

Who will you be voting for to win? Leave us a comment on our Facebook page @EntertainmentDailyFix and let us know what you think!