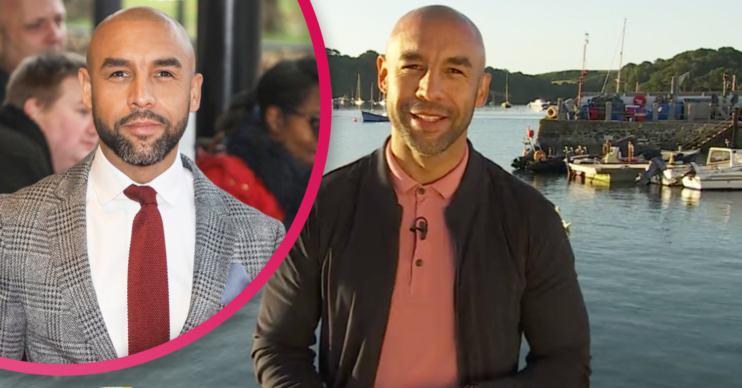 The presenter spent quality time with his son this weekend

Weather presenter Alex Beresford has treated fans to an adorable family snap with his son Cruz and their pet dog.

The shot shows Alex and 10-year-old Cruz posing in the car with their adorable four-legged friend Peaches.

Day out with the kids! Gang Gang

Making the most of the sunshine, Alex wore a pair of stylish brown-tinted Ray-Ban sunglasses.

Fans rushed to compliment the picture, with one saying: “Soooooo cute, you look very happy.”

A third wrote: “Wow what a pretty dog! Beautiful son too 😁 .”

Alex’s post comes weeks after he returned to the GMB studio as lockdown forced him to work from home.

It was the first time the weather presenter had been back on set since confirming his split from his wife Natalia.

Alex said: “It feels really good to be here in the studio.”

He added: “This is probably the first time I’ve come to London actually since lockdown so it was a bit weird getting on the M4 and travelling up to London.”

He continued: “But it feels great to be here and see you guys.”

Alex then joked he’d been struggling a little with his first day back, saying: “I can’t get to grips with it all. I came in this morning and the first thing I was worried about was make-up – there’s no make-up department.”

The bald star quipped: “It’s the first time I’ve done my hair in ages! I’ve done a bad job and I’d like to apologise to our make-up department who are fantastic.”

It was great to be back in the @GMB studio this week and have a chinwag with the handsome @benshephard😉, the boss @NeilThompson62, and new fellow co-host of @itv’s ‘All Around Britain’ @ranvir01 hitting your screens this September. pic.twitter.com/wxZXsAkXiB

Despite their split, they continued living together until two weeks before lockdown, meaning the presenter has recently been living on his own.

The star opened up on their separation for the first time on ITV’s Britain Get Talking podcast.

He said: “I don’t want to grow old on my own. Life is for sharing and it’d be great to meet someone in the future but they have to be right for me, right for Cruz.”

Alex added: “It’s been a massive learning curve, I didn’t think at the age of 20 that when I was approaching 40, I would be in this situation.”