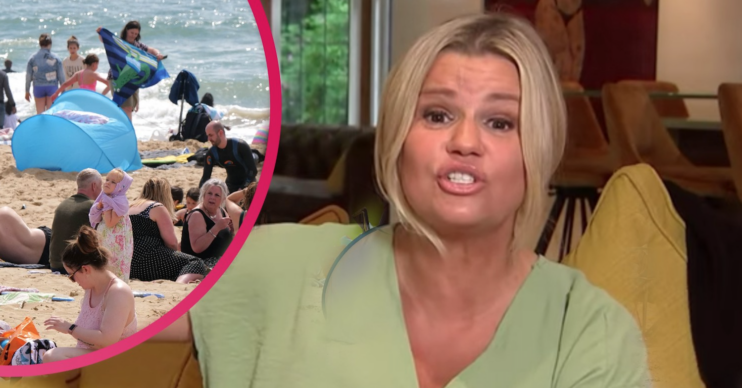 GMB viewers have slammed a “ridiculous” debate on today’s show (Thursday August 12) that featured Kerry Katona hitting out at people who “wee in the sea”.

We’ve all been there – you’ve just found your spot on the beach only to realise that you need a wee. So is it okay to jump in the water full of swimmers to go for a wee?@nickede says 'it's harmless and everybody does it'! pic.twitter.com/17vpkaq3DP

What happened on GMB with Kerry Katona this morning?

Hosts Ranvir Singh and Kate Garraway welcomed in Kerry and commentator Nick Ede to discuss the question whether people should be allowed to wee in the sea.

While Nick argued that it was perfectly fine for people to spend a penny while taking a dip, Kerry was horrified.

She called the practice “dirty and disgusting”.

Then things got really weird.

She continued: “I went to the zoo once when I was about three and my mum made me go for a wee near the lion cage because the toilets were too far away.

“And as I was weeing a lion came over and sprayed all over me to mark his territory.

“I don’t want to be in the sea and have a big fish or a shark come and wee all over me.”

After some reassurance from Kate, Kerry then went onto say that she was more worried about her kids.

“I’m more concerned about say my little girl is in the sea swimming and then someone next to her starts weeing.

“I think it’s disgusting,” she exclaimed.

How did viewers react to the wee-bate?

It wasn’t long before viewers let their feelings be known on Twitter.

One said: “Your programme has got its priorities all wrong.

“There are worse things going on in the world and you talk about peeing in the sea.”

Another fumed: “I’m sorry but uneducated, personal outrage for peeing is ridiculous & is not a debate.

“If you all want to get outraged & act on something.

“How about litter, plastic pollution, energy waste, buying mass produced food where its production is detrimental to the environment.”

A third wrote: “I’m confused by GMB because they seem to think they are a serious news programme and then bring Kerry Katona on to talk about weeing in the ocean.”