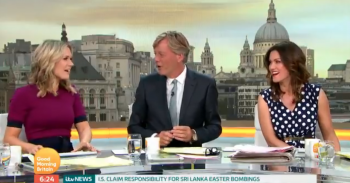 His teasing about her appearance did not go down well

Richard, 62, told his fellow presenter she looked “hungover” in footage of Charlotte from around 20 years ago.

The 43-year-old previously appeared on This Morning as a raincoat model when Richard hosted the ITV mid-morning show with wife Judy Finnigan.

Watching a clip of her taking a twirl in the studio, Richard piped up and declared Charlotte looked “tired” in the segment, believed to be her first appearance on TV.

“I must say I’ve seen the picture, you look totally different. You don’t look like you at all,” Richard said.

He continued: “You look as though you’ve been out all night! You look hungover… pale.”

Holding her face in her hands, Charlotte responded: “I know, I was at university at the time so I probably had been!”

Many viewers made it clear on social media they were not impressed by Richard’s teasing.

“I thought Charlotte looked great, what was Richard Madeley talking about? Oh by the way, what a gent. No doubt attended the @piersmorgan school of manners,” tweeted one fan.

“It’s Alan Partridge without the humour, warmth and personality. Never thought I’d say it but come back Morgan,” said another.

A third remarked: “Whereas Madeley looks like he has been outside all day. With no sunscreen.”

Others sent supportive messages to Charlotte, with one comparing her to Marilyn Monroe.

Another said: “I actually thought you looked good.”

The footage of Charlotte’s catwalk stint This Morning has featured on GMB before.

In August 2017 it made air – again when Richard was covering for a holidaying Piers. But on that occasion he said Charlotte looked “sweet” in her cream coat.

Yesterday Piers confirmed on Twitter he will return to GMB next Monday.

‘You look as if you were out all night.’@richardm56 is the master of flattery 😂Don’t worry @CharlotteHawkns – we thought your throwback was fabulous! pic.twitter.com/4n2ZVajS4N