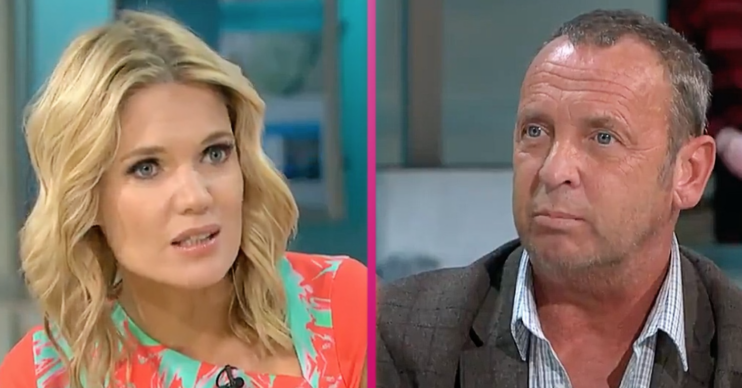 He described himself as a "shy, immature man"

Stagg, 57, was wrongly arrested for the murder of Rachel Nickell in 1992 and his character is currently appearing Channel 4 drama, Deceit.

However, Stagg left viewers divided after he said “all men lie to get what they want”.

He tells @ranvir01 and @CharlotteHawkns why he decided to agree to the drama.

Watch GMB on ITV and on the ITV Hub 👉 https://t.co/6iQ6ebeOEQ pic.twitter.com/mFI39yghcc

Hosts Charlotte Hawkins and Ranvir Singh welcomed Colin into the studio and talked to him about the case that changed his life back in the early 1990s.

Seen as a loner, he was pegged as a suspect by the police early in the investigation.

They employed a female undercover operative to extract a confession from him.

Read more: Deceit on Channel 4: Who did kill Rachel Nickell and where is Colin Stagg now?

However, she found no real evidence against him.

After spending 13 months in prison, he was acquitted in 1994 with the judge saying the police had used “excessive zeal”.

Subsequently, thanks to DNA techniques when the case was re-opened in 2008, Robert Napper was found guilty of the brutal murder.

Colin Stagg appeared on GMB this morning to talk about the extraordinary events.

He said that it was “just an incident that happened in my life” and admitted he as a “shy, immature young man” back in the 1990s.

When asked about the drama, he said he thought he came across “quite well” and not “creepy” as many regard him.

And, responding to the claims he shared sexual fantasies with the female undercover operative and spoke about the Rachel Nickell case with her, he said: “I was just responding to what Lizzie was telling me.

“Any man would tell any woman a lie to get what they want. It was no different from that basically.”

Flicked on #GMB to see Colin Stagg as he sat face-to-face with @ranvir01 @CharlotteHawkns – two female presenters -say that like any bloke, he’d lie to a woman to get what he wanted from her😮…no one batted an eye…can’t believe that entire interaction just happened 😧

Colin stagg an ordinary bloke who got caught in a manhunt…#GMB. He’s moved on…so should the world…

#GMB Colin Stagg may have been 'creepy' but that didn't make him a murderer and £700,000 was never enough..

One said: “Flicked on #GMB to see Colin Stagg as he sat face-to-face with @ranvir01 @CharlotteHawkns.

“Two female presenters – say that like any bloke, he’d lie to a woman to get what he wanted from her…

Read more: Rachel Nickell drama Deceit: Who was the real undercover cop ‘Lizzie James’ and what happened to her?

“No one batted an eye… can’t believe that entire interaction just happened.”

However, one viewer said: “Colin Stagg an ordinary bloke who got caught in a manhunt… #GMB.

“He’s moved on… so should the world…”