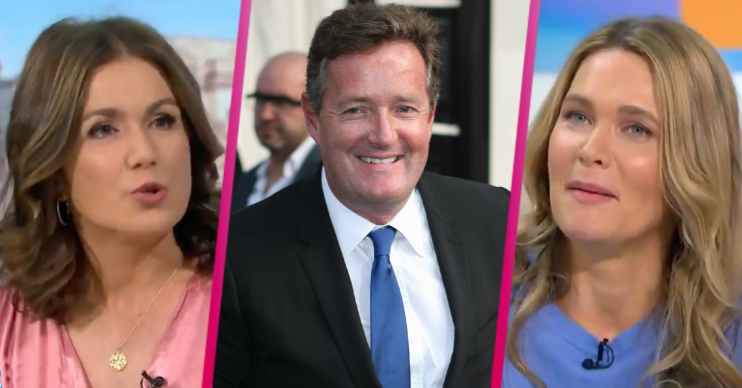 His wife Celia Walden was on the show today

Viewers took exception to comments made by Susanna during an interview with Piers’ wife Celia Walden.

She was on the show to promote her new book, but she ended up embroiled in a conversation about Piers and his upcoming plans.

Good Morning Britain: What did Susanna say about Piers Morgan?

Before Celia came on, Susanna and co-host Ben Shephard were chatting about Piers’ Ofcom ruling.

During the chat, Susanna admitted she felt awkward when Piers left the show.

“On the one hand, I’ve got my friend Piers Morgan and the other my bosses. It was awkward,” she admitted.

Later, chatting Celia, she said: “Obviously I’m in touch with him, he’s my friend,” before asking what is upcoming career plans were.

How did viewers react to the comments?

Susanna didn’t come off favourably on Twitter among GMB viewers.

She was branded a “hypocrite”, the GMB presenters were called “two-faced” and another asked why Susanna didn’t “defend” Piers if they are such good friends.

“Susanna avoiding eye contact with Mrs Piers on #gmb on the Ofcom subject,” said one. “‘Yes we’re all a family’, but clearly there were huge differences of opinion between her and @piersmorgan.”

A third claimed: “I sense a degree of two-faced, backstabbing has gone on.

“Piers was never mentioned, I remember a number of sly comments. Now they are sweetness and light, helping the Morgans’ bank balance.”

Another was a little more harsh.

“Shame nobody on your woke little show backed him at the time, how is the irrelevant weather man doing?” they asked.

“How two-faced these presenters are. Not one of them spoke up for Morgan, now they’re all over him like a rash,” said another.

“Was thinking the same – who would want colleagues/friends like these?” another added.

Susanna was right not to back Piers’ ‘disgraceful’ behaviour

However, some did recall the ferocity of Piers’ attack on the Duchess of Sussex, and said Susanna and the gang had done entirely the right thing.

“His behaviour was disgraceful,” one viewer said. “How do you speak up for that?”