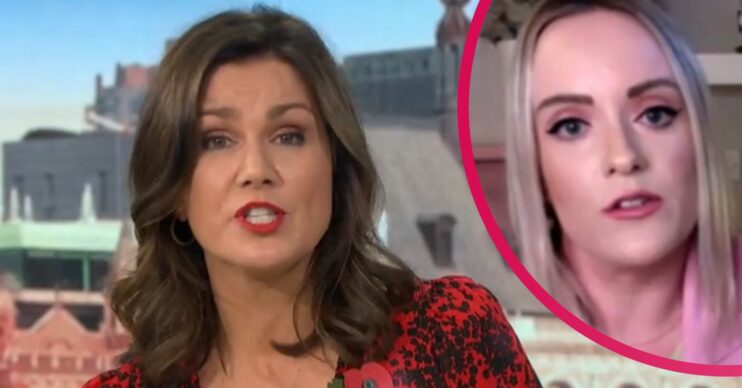 The guests took the question lightly

The host was interviewing a lesbian couple about NHS fertility treatment when she dropped her clanger.

When asking them about their hopes for the future she said: “Who wants to be mum?”

The couple, Megan, 34, and 33-year-old Whitney Bacon-Evans, looked momentarily taken aback before Megan replied: “Well we both want to be mum.”

Susanna, who was presenting alongside Martin Lewis, quickly raised her hands and offered the wives an apology for her comment.

“I apologise for that insensitivity…”

She then continued with the more appropriately phrased: “Who wants to carry the baby?”

Megan and Whitney took the mistake in good spirits and laughed it off as they revealed plans for Megan to carry their first child.

The couple appeared on the show to highlight the discrimination same-sex couples face when it comes to NHS fertility treatment.

What did Susanna Reid say sorry for on GMB?

They revealed that they’re required to have 12 rounds of privately-funded treatment before being eligible for NHS IVF.

The cost for a same-sex female couple or single woman could reach as much as £50,000.

Megan and Whitney are popular Instagrammers and have also starred on TLC show Say Yes To The Dress.

They’re affectionately known by their followers as ‘Wegan’ and hit headlines yesterday after launching discrimination action against the NHS.

The couple, from Windsor, has accused Frimley Clinical Commissioning Group of penalising them financially because of their sexuality.

Frimley CCG has denied discrimination, saying that same-sex couple or single women must pay for 12 rounds of private treatment to ‘prove’ medical infertility.

Read more: Who is The Tower star Emmett J Scanlan?

Yesterday Megan and Whitney used their Instagram page to thank their supporters as they launched their petition.

They wrote: “THANK YOU so much for all of your support! It honestly means the world! We’ve been completely overwhelmed by all of the wonderful messages & comments of support in announcing our discrimination case. Thank you also SO much to everyone who has donated to our fundraiser already, it means so much!

“Today has been a VERY busy day behind the scenes and we’re grateful for the opportunity to be creating such awareness around such an important subject. Keep an eye out as we have a few TV & radio appearances tomorrow / soon to help further bring visibility.”