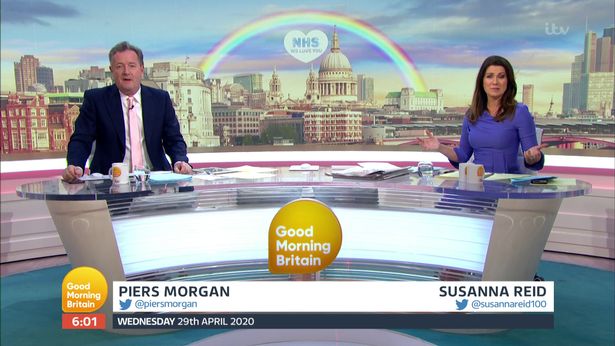 Piers and Susanna say crew 'are losing their minds'

Susanna Reid and Piers Morgan had an awkward start to GMB today when their intro music and voiceover announced Lorraine Kelly as the show’s host.

As the show started, the voiceover announced: “Wednesday 29 April, 2020. Live from Television Centre in London.

“This is Good Morning Britain with Lorraine Kelly.”

Read more: Dr Hilary Jones warns of rare new syndrome in children that could be linked to coronavirus

Piers and Susanna looked taken aback, especially as the Lorraine part of the show doesn’t start until 9am.

“This is what happens when you get into this stage of lockdown, is that people start to lose their minds. Just look at Susanna and me…”

Piers was interrupted as the correct voiceover began to play, with him and Susanna both agreeing that it was too late to try and fix the error.

Piers continued: “That would have been news to Lorraine, who is still asleep!”

Susanna joked: “Oh my god, can you imagine? Right now she’s in a panic!”

Piers then tried to mimic Lorraine’s accent, adopting a high-pitched voice: “What the hell! They never told me, the big bambots!”

Why is GMB on air?

GMB has remained on air during the coronavirus crisis with a reduced team to make it easier to stick to social distancing rules.

Those working on the show are classed as ‘essential workers’ as they bring viewers up to date information about the ongoing pandemic.

The presenters have been doing their own makeup while some of the team such as Andi Peters and weather expert Charlotte Tobin are filming their segments at home.

Yesterday, April 28, Piers and Susanna had to apologise to viewers as the show experienced some sound issues.

“We are having a minor issue with some of our music,” Susanna explained.

Piers continued: “We were told two minutes ago that nobody may hear us throughout the entire programme, which would obviously be a little disappointing!”

Susanna added: “They prioritised our microphones, which we are very grateful for, but some of the background noise might be missing.”

“Some of the bells and whistles will not be available to your ears for a while,” Piers clarified.