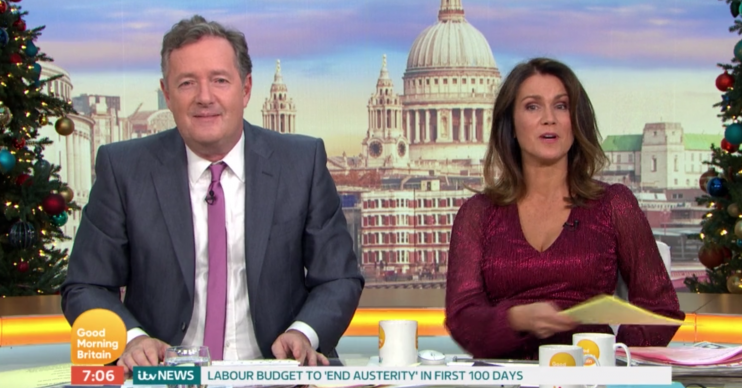 Piers Morgan will ‘drag’ himself back into work on Friday to helm Good Morning Britain‘s coverage of the General Election.

Many GMB fans were delighted to hear the ex newspaper editor will be working on his usual day off.

But there’s no need to fret Piers will be overworked and turn up for five days (or even four days) in a row this week because of the shake up – he’ll still be taking Thursday off.

Piers, 54, joked to viewers earlier today he will be putting in a shift on Friday as a ‘national duty’.

“There’s an election special, so my weekend will not be starting on Wednesday morning as it normally does,” Piers said.

“I’ve got to be dragged back in here… shocking.”

It’s not a full week is it? You won’t be doing Thursday.

Fellow host Susanna Reid pointed out: “It’s not a full week is it? You won’t be doing Thursday.”

Piers replied: “No, but four days is a real stretch.

Chuckling, Susanna fired back: “I thought you were going to say you would do it for the money, which might be more honest.”

Many viewers gave the change to the usual presenting line up of Kate Garraway, Charlotte Hawkins and Ben Shephard the thumbs up.

“How could you not love Piers. Hilarious as always!” tweeted one viewer.

‘I’ll do it for the nation.’@piersmorgan is joining us on Friday for an Election Special.

That will be a gruelling 4-day week for Mr Morgan! pic.twitter.com/eKCaDsykGx

“GMB is only best when Piers Morgan is on,” claimed another.

A third added: “We need you on Friday.”

However, one social media user objected: “The nation would rather you didn’t.”

And another added: “That’s one way to ruin my Friday morning @gmb, I’ll he watching @BBCBreakfast instead now!”