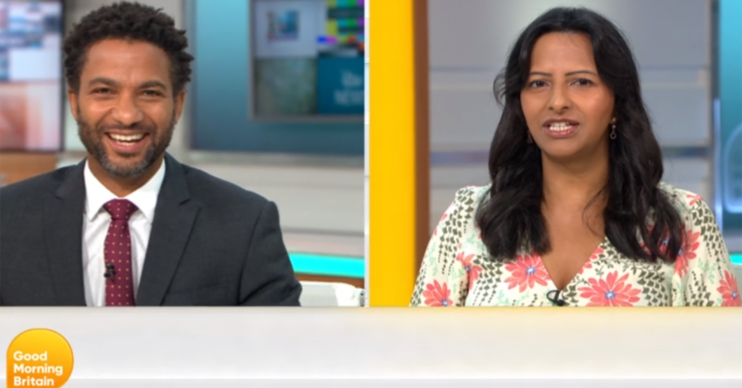 Ranvir Singh had to apologise to on-screen partner Sean Fletcher after a hilarious dog incident on Good Morning Britain.

The presenter, 43, said sorry to Sean after her dog HUMPED him in their dressing room.

What did Ranvir Singh say to Sean?

Ranvir had brought her gorgeous pooch Shmizzels into work today (Monday August 31) so he wasn’t left at home on his own.

But during a pre-show meeting, the doggie got a little over-excited.

“I feel I owe you an apology Sean, I know it’s only 17 minutes past six,” she began the on-air chat.

Read more: Piers Morgan slams pranksters after they harass his famous friends for his fake obituary

“I’ve just had to apologise, there was a rather over-amorous incident that occurred this morning, completely not of Sean’s doing.”

“I’m sorry you were humped by my dog, I apologise,” she laughed.

What did the dog do to Sean?

Sean, 46, then explained what happened over a piece of footage from the meeting.

“We are playing with each other, this is our morning meeting, you brought your dog.

“I was basically a dog sitter throughout the whole meeting, while you did the meeting with Ben, our producer, I was having to look after the dog.

Read more: GMB’s Alex Beresford accused of ‘fat shaming’ after he says he was ‘fat-fished’ on dating app

“Because puppies bite you, it’s all playful, and he really liked the smell of me because I’ve got a girl dog and you’ve got a boy dog, and that’s when the humping started.

“He is an adorable dog but when he started humping me I thought we’d crossed the line,” laughed Sean.

While the likes of Sean, Ranvir, Adil Ray, Kate Garraway and Charlotte Hawkins have been holding the fort, the show’s main presenters are set to return tomorrow (Tuesday September 1).

Piers Morgan and Susanna Reid are set to make their big comeback after their summer break.