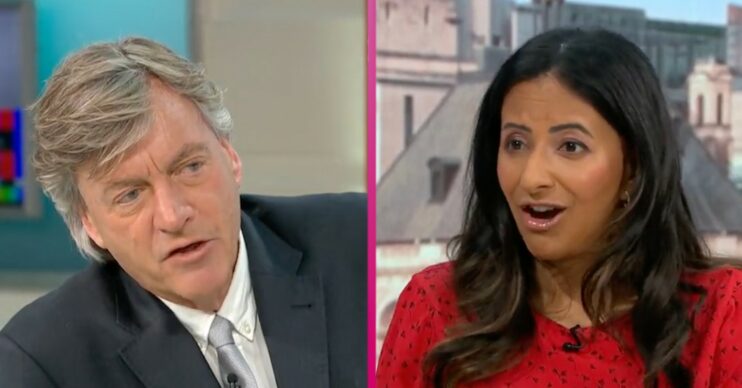 There was a slight presenting shake-up today

Richard Madeley was joined by Ranvir Singh on this morning’s show – and it’s safe to say that not every viewer was happy.

There was a bit of a shake-up on the presenting front on Good Morning Britain today.

Richard, who is usually joined by Susanna Reid Mondays through to Wednesdays, had a new co-host this morning.

Semi-regular host Ranvir stepped in to fill the breach left by Susanna today.

Together, Ranvir and Richard discussed the rail strikes impacting the country, flight cancellations, and the plans to tag asylum seekers.

Ranvir and Richard seemed happy to be presenting the show together – but some viewers were far from thrilled.

Plenty of viewers took to Twitter this morning to complain about Ranvir and Richard hosting the show.

“Could there be any two worse presenters on Good Morning Britain today?!” one viewer tweeted.

“BBC here I come Singh and Madeley. No,” one said.

“Madeley and Singh, can GMB get any worse?” another tweeted.

However, one added: “@GMB @ranvir01 on fire this morning, great presenter.”

Today wasn’t the only day where GMB viewers were unhappy with the hosts of the show.

On Friday (June 17), viewers were left seriously unimpressed after GMB hosts Adil Ray and Kate Garraway had a giggle about sex.

During the show, Dr. Amir suggested that one way to combat hayfever is to have sex.

“There will be couples up and down the country going: ‘I’ve got hay fever, love!'” Adil joked.

The presenters definitely found the discussion funny, but some viewers at home did not.

“Gosh, utter chaos on #GMB as fully grown adults giggle like children because someone mentioned having sex,” one viewer said.

“Omg. Calm down. It’s not that exciting #GMB,” another moaned.

Good Morning Britain airs on weekdays from 6am on ITV and ITV Hub.