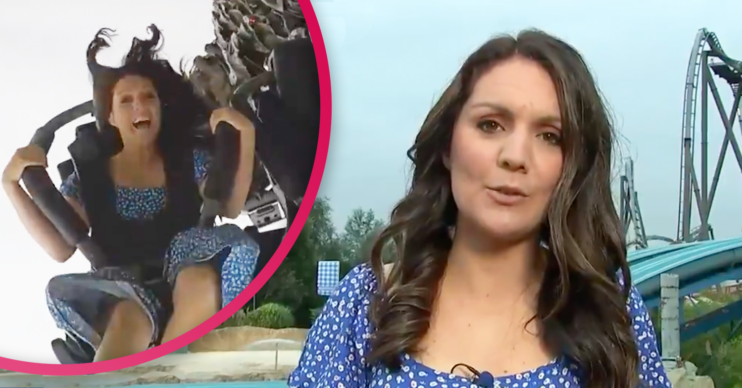 Laura presented today’s weather from Thorpe Park and, as well as her usual role, she also took time to enjoy a ride on one of the park’s roller coasters.

“Do you think she thought that dress through?” Kate asked Ben as Laura’s skirt got caught by an unfortunate gust of wind.

Kate and Ben weren’t the only ones who found Laura’s roller coaster ride hilarious though, so too did the viewers.

“And that Is why GMB is better than BBC Breakfast,” declared one giggling fan of the show.

“Laura Tobin doing the weather on #GMB. She’s so funny I love her! She’s so sweet and always in such cool places but today was the best,” said another.

The perfect way to bring in the weekend! 🎢😂@Lauratobin1 you’re braver than us! pic.twitter.com/krpaDtd204

“It was too funny watching her on the rollercoaster!”

“Thank you for making me laugh like I have never laughed before!” said another Laura fan. “Brilliant. TV gold.”

Why am I staring at the weather lady’s crotch …. #GMB pic.twitter.com/y9yToJK0em

Others echoed Kate’s sentiments, though.

“Poor Laura, always always wear trousers when you go to a theme park!” laughed one viewer.

“Omg almost got to see her weather map,” said another.

Read more: GMB viewers are all saying the same thing about Kate Garraway’s appearance on the show today

“Laura protecting her virtue,” another joked as she struggled to keep a hold of her dress.

“Nearly choked on my Shreddies at @Lauratobin1 trying to keep her dress in check,” giggled another.

“Nice segment on the native beaver there at Thorpe Park!!” another joked.

“Seen ya panties lol,” quipped another.

She was presenting a toe yoga segment and gave viewers an eyeful as she picked up a towel with her foot and flicked her leg up in the air!