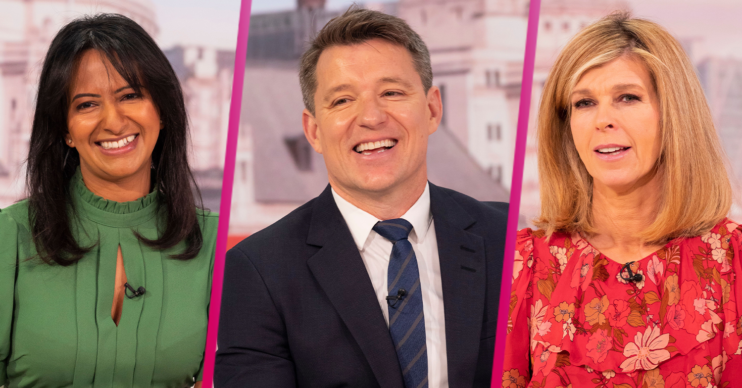 ITV has been airing Good Morning Britain since 2014, making household names out of its many presenters.

Handing over to Lorraine Kelly at 9am, the show is designed to equip the British public with all they need to know before starting off their day.

But who presents GMB? And what are their areas of expertise? Read on and we’ll tell you all there is to know!

Once described as Piers Morgan’s “sidekick”, Susanna Reid is the glue that holds the entire show together.

A leading presenter and journalist, she’s unafraid to speak her mind and stand up to those pesky politicians.

Prior to joining Good Morning Britain as a presenter on its 2014 launch, she worked over on BBC Breakfast. Here she presented the early morning show from 2003-2014.

She also competed in Strictly Come Dancing’s 11th series in 2013. Paired with Kevin Clifton, the pair were named runner-ups and even got to perform at the iconic Blackpool Tower Ballroom.

Ben Shephard joined Susanna on the show in 2014 and, like her, has remained as a presenter on GMB ever since.

The 46-year-old Tipping Point star’s career took off back in 1998 when he started presenting The Bigger Breakfast on Channel 4.

This led to a string of presenting roles for ITV, including for the now defunct GMTV, where he presented entertainment segments – much like Richard Arnold today (but more on him later!).

Ben went on to serve as a regular This Morning presenter up to 2014, when he took the Good Morning Britain job.

Kate Garraway often presents alongside Ben on GMB. In addition to serving as a leading presenter, she will often act as newsreader.

Kate, 54, has an ITV career that spans back to 1989. She originally worked in local television journalism for ITV News Central.

She briefly joined Sky News in 1998 before returning to GMTV Today in 2000.

She went on to co-host Daybreak up until it was cancelled in 2014 and replaced with Good Morning Britain.

Joining the GMB team she is known for having a particularly close bond with Ben Shephard – whom she’d previously worked with on GMTV.

He has acted as a pillar of strength for Kate as her husband Derek Draper battled coronavirus, with Kate capturing the hearts of the nation as she willed Derek to survive.

The journalist and newsreader, 45, worked for Sky’s Sunrise and Five News prior to her move to Good Morning Britain.

Joining the team in 2015, she primarily serves as a newsreader and as a presenter when the show’s main hosts are taking a break.

In addition to her GMB duties, she also hosts a Sunday afternoon show every week on Classic FM.

In August 2018 he temporarily replaced Piers in the hot seat, joining as a guest presenter in February of the following year.

In the summer of 2020, Adil presented the show twice a week during the summer holidays, with the host becoming a more regular face following Piers’ departure.

He started his career on a pirate radio station before landing a job at a small Asian radio station and later moving to Choice FM.

Add joined the BBC Asian Network in 2002, hosting the late-night Adil Ray Show. He moved to drivetime then breakfast and went on to have a host of other radio gigs with the BBC.

In 2011, he created and starred in Citizen Khan, he’s also acted in Ackley Bridge and has his own ITV quiz show, Lingo.

Sean Fletcher, 47, is an American-British presenter who has served as a sports presenter and correspondent on GMB since 2014.

Since Piers’ departure, he too has found himself in front of the camera more often, hosting alongside the show’s leading ladies.

Sean is also a regular CountryFile presenter, he fronts Songs of Praise and Inside Out London.

The man who took down Piers: Alex Beresford

Alex Beresford, 40, serves as one of GMB’s main weather reporters, but his altercation with Piers Morgan has seen him move along the desk to the co-anchor seat.

Alex is known to present both in the studio and out on location.

He competed in Dancing on Ice 2018, and was the seventh celebrity to be voted out.

He’s also a presenter on the Tonight show, ITV News West Country and hosted All Around Britain back in 2020.

He rose to fame fronting This Morning alongside wife Judy Finnigan, with the pair presenting it from the very start in October 1998 till July 2001.

Richard went on to front Richard & Judy on Channel 4 with his wife – the show that launched their famous Richard & Judy’s Book Club.

He’s hosted Have I Got News For You, appeared on Question Time and became a huge hit with GMB viewers – with many calling for him to permanently replace Piers.

Laura Tobin, 38, is a meteorologist and weather presenter. Originally working for the BBC, she joined ITV’s Daybreak back in 2012.

She currently presents the weather bulletins for Good Morning Britain.\

Ranvir Singh, 42, started her broadcast journalism career for the BBC.

She switched over to ITV in 2012. Here she has served as a newspaper reviewer on This Morning, co-hosted The Martin Lewis Money Show and then joined GMB.

Joining GMB in 2014, she has served as a live news reporter and as a presenter. She now serves as the show’s political editor and sometimes anchor in Susanna’s absence.

The lovely Ranvir also waltzed her way into the nation’s hearts when she partnered with Italian stallion Giovanni Pernice on Strictly last year.

The couple’s chemistry most certainly got viewers talking – as the pair’s reunions post-Strictly live on GMB!

Richard Arnold, 51, has served as GMB’s entertainment editor since it stated back in 2014.

Known for his effortless, friendly style, he interviews some of the biggest celebrities around the world for the ITV show.

After the past year, Dr Hilary Jones is surely the man who needs no introduction.

He’s been on hand regularly to inform and educate the nation in all things COVID since the pandemic begun back in March 2020.

Dr Hilary gained fame on Daybreak before switching over to GMB when it launched.

The doctor is now regarded as a leading health expert in the UK.

Martin Lewis, 49, is the founder of MoneySavingExpert.com and is a financial journalist.

He serves as a financial expert on GMB – and has his own stand-alone money-saving show.

Andi Peters, 49, is a presenter, voice actor and journalist.

He gained initial fame on Live & Kicking and went on to present on GMTV, Dancing on Ice: Extra and of course GMB.

On Good Morning Britain he primarily presents competitions – so Andi’s your man if you’re looking to boost the bank balance!

Head to our Facebook page @EntertainmentDailyFix and tell us which of the Good Morning Britain presenters is your favourite.