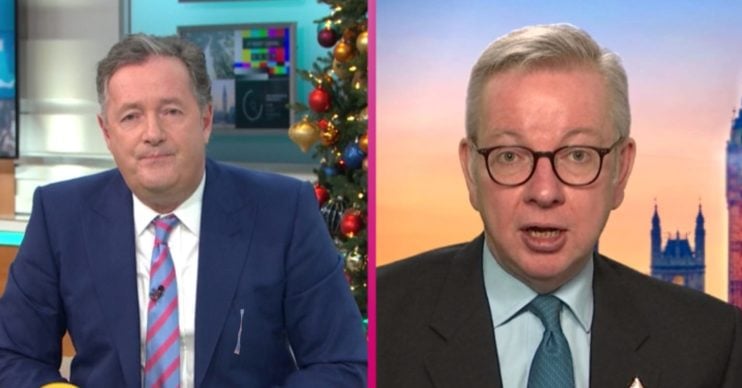 The pair got into a heated row as the politician denied the government followed a herd immunity strategy during the early stages of the pandemic.

Mr Gove accused Piers of being “defensive” as the presenter blasted the government over their coronavirus policies.

Piers countered Mr Gove’s claims that Government ‘was never pursuing a policy of herd immunity’ with comments from the UK’s Chief Scientific Adviser.

He said it on the record.

“You were ‘following the science’ at the time, do you remember?” Piers pressed.

“You told us every single day ‘we are following the science’. Not ‘guided by’. Not ‘listening and making your own decisions’. ‘We’re doing what the scientists tell us.’

“Your Chief Scientific Adviser, before the first lockdown, he said quite unequivocally, that we were following herd immunity.

“And the attempt by the British Government to deny what your own Chief Scientific Adviser said on the record then I’m afraid will not survive a public enquiry.

“He said it on the record, on radio.”

Mr Gove replied curtly: “We were not following a policy of herd immunity.”

But Piers refused to let it go as he asked: “Why did he say we were?”

“Our policy is informed by the science,” he added.

Causing Mr Gove to shift in his chair, Piers continued to turn the screws.

He said: “You said at the time you were following the science. You can’t be ‘informed’ and ‘following it’ and then ignoring it. It is either one or the other. You’re either following it or you’re not.

“I can go back and play a hundred clips of ministers saying you were following the science. You said it every single day.

Mr Gove denied he suggested Sir Patrick Vallance ‘had no idea what he was talking about’.

After the interview was brought to an end, Piers’ frustration was clear.

“So there we have it,” he said. “They weren’t following the science at all. In fact they were doing completely the opposite.

“Isn’t it fascinating what you find out months later, when you were told directly by all of them that they were following the science? Repeatedly, every day.”

'They don't trust the govt's handling of the pandemic.'

Challenged on the lack of trust people have towards the govt and their calls for people to take the vaccine, @michaelgove tells @susannareid100 that people should take the lead of those who have already had the vaccine. pic.twitter.com/JXPOOxyZKP

What did Good Morning Britain viewers say about Piers Morgan?

Piers later went on to retweet praise for his approach from viewers.

One observer wrote: “Excellent questioning of Michael Gove by @piersmorgan on Government denying they were pursuing disastrous ‘herd immunity’ policy as COVID-19 spread.”

Someone else tweeted: “@piersmorgan hammers Michael Gove in a masterclass of how to hold Gov’t to account. I hope #BBCBreakfast was watching.”

And a third concluded: “As #PiersMorgan ripped him to shreds, Michael blinked his eyes more times than a flashing speed camera.”

But not everyone was impressed with Piers. One viewer took exception to the way the host crossed his arms during the grilling.

They laughed: “@piersmorgan makes an idiot of himself again #GMB. Can’t think why @susannareid100 puts up with him. Her face a picture during that effort to blitz @michaelgove. Don’t fold your arms, Piers, you look defensive.”

Another social media user reckoned: “If Piers was any good, he would have got Gove to answer the question rather than keep making the same accusations at him.”

And someone else claimed: “That was a slanging match.”