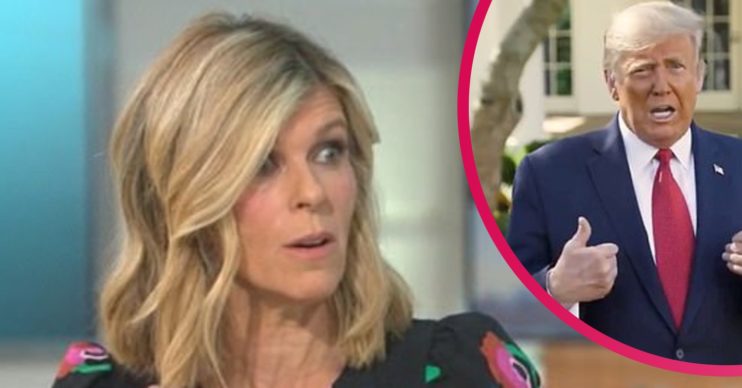 The ITV star is less than pleased with the U.S. President

Kate Garraway has confessed she was left in complete shock at Donald Trump over his bizarre claim that his coronavirus diagnosis was a “blessing” from God.

The Good Morning Britain presenter told viewers that Mr Trump was failing to take into account the over 200,000 Americans that have died from the disease.

The ITV star shared her thoughts on the President’s latest comments after Susanna Reid quizzed her on Thursday morning (October 8).

What did Kate Garraway say about Trump?

Kate said: “The idea of getting a fatal disease with no confident cure as any kind of blessing from God is such a strange thing to say.

“If I’m trying to be fair to him, does he mean it’s a blessing because he now understands the impact? He’s now used himself as a trial for some of these things? That’s a nice way that you’d hope he’d be saying it.

“But it completely ignores those things aren’t tried and tested.

She added: “You can’t say something’s a blessing when more than 200,000 people in your own country and more than a million worldwide have died.”

Mr Trump’s remarks no doubt felt personal to Kate, whose husband is still in hospital after battling coronavirus earlier this year.

It is still unclear whether Derek will ever recover fully.

“He’s trying to be a leader in his own vision,” Kate added of Trump. “The strong leadership position at this point would be publicly following the rules, be publicly sensitive to those that have lost and be a beacon of the way to behave.”

What happened to Kate Garrway’s husband?

The GMB star’s husband has been in hospital since March after being struck down with coronavirus.

She said: “I have huge sympathy with people who are fed up with it. I think if you haven’t been directly touched by it, you haven’t seen the devastation, your life has been devastated, your livelihood, your ability to feel a sense of joy, you’re going to get frustrated.

“It does make me tempted to show a pic of Derek in his current state and say ‘you don’t want this in your life. You don’t know who it will affect and how. So stick to it.”

However, she added that she understands the confusion – but ultimately the rules are there to save lives.

Heartbreakingly, she said that Derek’s parents haven’t been able to visit him in hospital at all.

How is Kate Garraway coping?

“If they can go six months without giving a hug to their son, who’s so desperately ill, the rest of us can probably get through.

“Sorry, I didn’t mean to depress everybody. That’s the reality of getting caught up in the virus directly.”

He has been in hospital for over six months.

Admitted on March 28, he tested positive for coronavirus.

Shortly after he was placed on a ventilator. But he was awoken from an induced coma in July.

From then on Kate has been able to visit Derek intermittently in hospital.

Furthermore, Kate has said he has lost eight stone since being hospitalised.

Although awake, he has yet to say a word.

Watch Good Morning Britain every weekday from 6am on ITV.