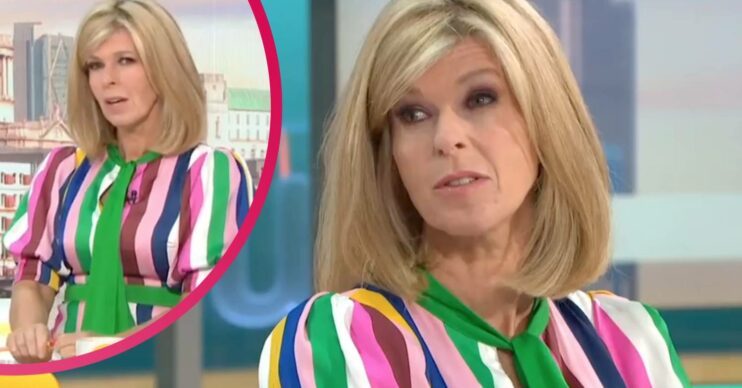 The 54-year-old appeared on GMB this morning (August 19) wearing a bright dress featuring multi-coloured stripes as she presented the show alongside co-host Richard Bacon.

Some viewers joked that Kate‘s daring look reminded them of a deck chair, a duvet cover or a stick of rock.

One person on Twitter remarked: “Kate Garraway [is] dressed like she is going to meet Willy Wonka at the chocolate factory after finishing #GMB.”

“Can’t make my mind up, has Kate come dressed as a deck chair, stick of rock or a court jester?” joked another.

Kate is dressed like the television test card this morning lol 😂

Another person suggested that Kate had come dressed as the “television test card” while another said that “fashionista” Kate had come to work “dressed as an Oompa Loompa’s duvet cover”.

However, not everyone was so quick to judge Kate’s stripy dress.

“Kate, your dress is stunning and, of course, you look beautiful,” one person wrote.

Another gushed: “I am in love with your dress this morning… May I say you look stunning.”

It’s not the first time Kate’s looks on the show has provoked comments from viewers.

Earlier this month she stunned viewers with a glamorous new look, wearing a long pink gown and her hair in loose beachy waves.

Kate is taking a short break from GMB

Kate is currently preparing for a holiday with her two children Billy and Darcey.

However, Kate had to make sure her husband Derek Draper has the right care while she’s away as he recovers from COVID-19.

Staying up late making plans made the presenter almost miss her presenting slot on the show this morning.

She told co-host Richard: “Derek’s family are descending to take care of Derek for a few days while I take the kids away.

“I was up late thinking if I’ve remembered everything. That’s my excuse.”

The presenter recently revealed a hope she has for Derek after her ITV documentary about his health battle, Finding Derek, became nominated at the NTAs.

Kate said: “I was just looking and the ceremony – is it the 9th September?

What’s your opinion on Kate Garraway’s dress? Leave us a comment on our Facebook page @EntertainmentDailyFix and let us know what you think.