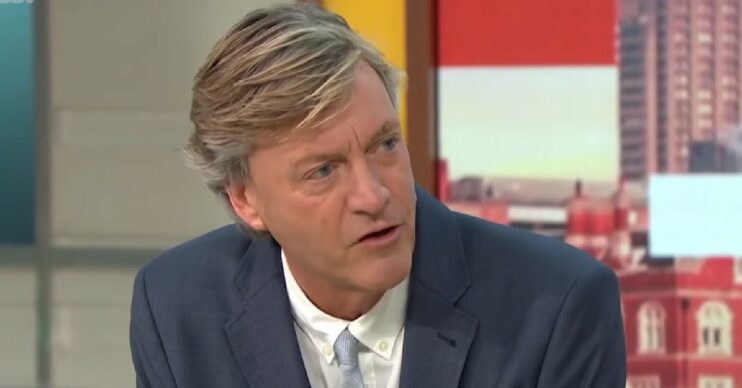 Richard called it a 'habit' during the heated debate

Good Morning Britain has been hit with Ofcom complaints after Richard Madeley referred to a guest as “darling”.

The presenter caused a stir whilst interviewing Insulate Britain campaigner Tracey Mallaghan on the ITV programme.

During the segment, Richard and Tracey got into heated debate as he accused her campaign of risking lives by blocking up roads on the motorway.

The interview occurred on the show last week (October 27).

At the time, Richard probed Tracey about the people who were unable to get to hospital because of the Insulate Britain protests.

He then brought up the case of a woman suffering from a stroke due to the blocked roads.

But as the host became increasingly frustrated with Tracey, he referred to the guest as “darling”.

Richard said: “You are not answering the question, are you?”

Richard said: “Well, my questions are my decision, to be honest with you…”

She responded: “Do you know what a 2 degree world looks like? Why can’t we talk about it? That is the question Richard.

“A 95 per cent chance of a 2 degree world for our children, do you know what looks like?”

It is a showbiz thing, we call everybody darling

Richard said: “What you are doing, darling…”

The presenter stopped himself, before adding: “Sorry to call you darling.

“It is a showbiz thing, we call everybody darling. It’s a habit of mine and I find it hard to stop. Let’s just get back to the question. I completely take that back.”

Since then, Ofcom has received 51 official complaints over the incident.

Meanwhile, viewers flocked to social media to complain at the time.

One tweeted: “Please can you remove the sexist ‘darling’ Richard Madeley, I’ve had to turn GMB off again as feel so infuriated by his condescending speech to a female guest.”

Another said: “Darling… slightly sexist language Richard. What other language do you use Richard in your showbiz world?”

Darling……… slightly sexist language Richard. What other language do you use Richard in your show biz world ?

You need to listen to this woman too, not answering just shouting

However, one appeared to defend Richard over the comment.

They shared: “How dare she have the cheek to have a go at Richard for calling her darling but then call him stupid!! Respect goes both ways! What absolute nonsense from her! Just answer the question!!”

It certainly isn’t the first time Richard has referred to a guest as “darling” on air.

Last month, the presenter was labelled “disrespectful” after using the term during a discussion on Netflix’s Squid Game.

ED! has contacted ITV for comment on this story.