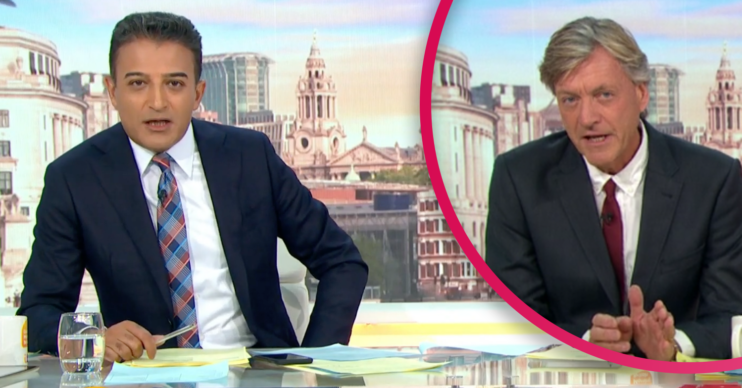 He left GMB viewers annoyed with his shouting and 'unprofessional' attitude

It seems like there is just no pleasing viewers of Good Morning Britain who turned on Adil Ray as he fronted today’s show in place of Richard Madeley.

Yesterday, fans of the show were furious with host Richard for comments he made to a guest who had been a victim of drink spiking.

But you’d be wrong. Very wrong.

What did Good Morning Britain fans say about Adil?

Poor old Adil got viewers backs up during today’s show, with Twitter users branding him “unprofessional” and “intolerable'”.

“@adilray must be the most unprofessional presenter on TV anywhere,” one watcher ranted.

Another narked viewer accused the presenter of shouting over everyone else to get his opinions heard.

She tweeted: “Why is it as soon as someone shows a difference of opinion on GMB they get shouted down? Adil proclaims to have no time, but has time to shout over and get his point across.”

Meanwhile, one viewer dubbed him as embarrassing.

But not everyone agreed and there were some Adil fans in the house.

One said: “Really happy to see Adil back on #gmb and hosting the show alongside Kate. They make a great team.”

“More of Kate and Adil hosting please,” said another.

@adilray must be the most unprofessional presenter on tv anywhere. #GMB

Why is it as soon a someone shows a difference of opinion on #gmb they get shouted down? Adil proclaims to have no time, but has time to shout over and get his point across.

What did Richard Madeley do on Good Morning Britain yesterday?

Richard upset viewers yesterday when he and co-host Susanna Reid discussed the worrying surge of “spiking” in clubs.

To help with the discussion, they welcomed Jemma Wolstenholme – a young woman who had been the victim of spiking.

Along with her mum, she described her horrific experience.

Subsequently, Richard asked: “But had you been taking precautions?”

He continued: “Had you, obviously you’re aware of the risk of drinks being spiked, had you been trying to protect your drink?

Jemma responded: “Yeah, well it’s sort of second nature now because we have been told for so long that we should be careful who is near our drinks.

“So if I did leave it, it was left with my friend and it was ‘Watch my drink’.”

Viewers soon took to Twitter to register their dismay at Richard’s line of questioning.

One wrote: “@richardm56 sounded like victim blaming, asking if she took precautions.

“You wouldn’t ask that of someone who was physically attacked, or house was burgled #gmb.”