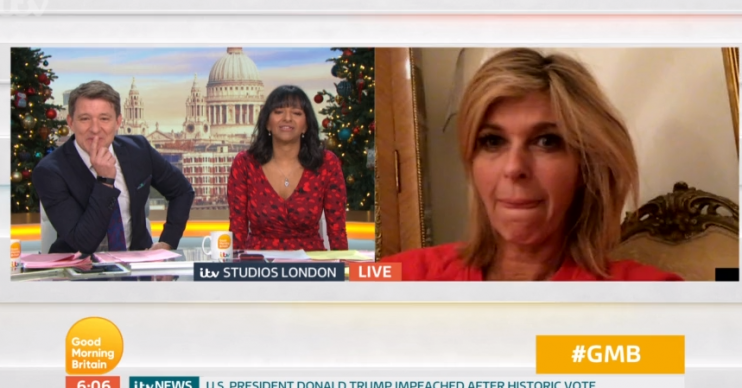 She was replaced on today's show after accidentally oversleeping

ITV breakfast TV viewers have made it clear they want Good Morning Britain presenter Kate Garraway to keep her job – despite her concerns she could be fired after missing her first show back since her stint on I’m A Celebrity.

The 52-year-old was replaced by Ranvir Singh on the show earlier today after accidentally oversleeping – a blunder she says has never happened to her before in 20 years of broadcasting.

Kate shared a snap of herself just moments after waking up and realising the horror of her “disaster” on Instagram and later appeared on the show via a video call to explain herself.

Viewers were also polled on social media to gauge whether they thought Kate should be giving her marching orders for the error.

And even though she was given plenty of backing – with 78% of respondents saying she should stay at the time of publishing – viewers still begged for Kate’s services to be retained.

We all make mistakes.

Another insisted: “Kate is a TV legend! Please don’t fire her! She is @GMB’s queen of the jungle!”

And another begged: “Don’t fire poor Kate, just send her back to the Jungle for a week.”

A fourth person suggested Kate should make amends by working on December 25.

“Not fired, but a Christmas morning special to make up for it,” they put forward.

“She’s a down to earth diamond. We all make mistakes,” reasoned another Kate defender.

Oh no – disaster – overslept on my 1st morning back at work on @gmb . Fell asleep last night fully made up with clothes on and contacts in – didn’t set alarm . Woke up looking like this !!!??!!! Can’t believe it – am going to get fired first morning back! And to think @adeleroberts & @romankemp we were talking about this in the jungle and I was proudly saying I had never overslept enough in 20 years to actually miss a show !!!! That’s karma !!!!

While another worried about the future of GMB if she wasn’t part of it: “Love Kate so much! Show would not be the same without her.”

“She deserves to keep her job just for looking that good with yesterday’s make up on,” quipped another Kate supporter.

But another viewer was less sympathetic, even though they still felt she should stay.

“Much as I don’t want her fired, she could have set a wake-up alarm,” they wrote.

Meanwhile, an unimpressed poll voter criticised anyone who did back a sacking, pleading for clemency.

“You guys are cruel!!! We’ve all overslept at one point in our lives!” they claimed.

Should @kategarraway be fired for sleeping in late and missing the show? #GMB

– Good Morning Britain airs on weekdays from 6am (don’t forget in future, Kate!)