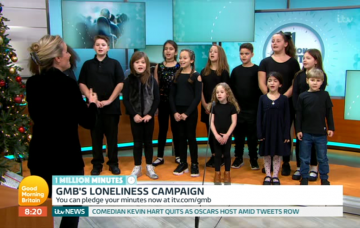 ITV viewers were moved by the appearance of a children’s choir, made up of young people who have all lost a parent.

But just seconds into their emotional performance, their song was cut short to make way for adverts.

As ads aired for mobile phones and cut-price wine, furious viewers complained about the “ruthless” move.

The “angelic” singers were invited onto the morning show to raise awareness for GMB’s Loneliness Campaign, which asks viewers to pledge money to the cause.

Hosts Ben Shephard and Kate Garraway then introduced the choir Grief Encounter to the stage and announced they would be singing Jealous of the Angels – part of a project with classical superstar Katherine Jenkins.

Read more: Blockbusters is returning to TV with Dara O’Briain as host

TV viewers were moved to tears by the lyrics, which included the line: “I didn’t know today would be our last, or that I’d have to say goodbye to you so fast.”

But the tears were quickly replaced by fury as the song was faded out to make room for an ad break.

One enraged viewer tweeted: “What is wrong, cutting that gorgeous children’s choir off for some stupid adverts. Have a heart, be ashamed of yourselves.”

#GMB
What is wrong, cutting that gorgeous children’s choir off for some stupid adverts. Have a heart, be ashamed of yourselves

Bit ruthless to cut the channel on that kiddy choir.
Didn’t think they sounded that bad #GMB

Beautiful choir but shame they were cut off quickly. Life can change in a matter of minutes. Me and my daughter 7 lost my partner her dad so suddenly. Collapsed and died right in front of us. He was 35. Now my daughter is 16 and we make sure we talk about him as much as we can.

@GMB That wasn’t nice to cut off the choir, 10 minutes before you finish!!

I waited ages to see the Choir – then you cut them off mid song. Not even an apology after the ad break Shame on you…

@GMB Absolutely gutted you cut the children's choir off! 😢

@GMB, why cut off the choir in mid-song for an ad break? How disrespectful to the children who’ve lost loved ones.

Another added: “Bit ruthless to cut the channel on that kiddy choir.”

A third said: “Come on @GMB how could you cut that beautiful choir off #terrible #sad.”

Many called producers “ruthless”, “disrespectful” and “shameful”, while others called for the choir to be allowed to sing again. This time, until the end of the song.

Grief Encounter performed after former Sky Sports and Blue Peter star Simon Thomas, 45, and his son Ethan came on the show to talk about losing a parent.

The Good Morning Britain hosts did not address the song being cut-short when the live show continued after the ad break.

However, a spokesperson for Good Morning Britain told us: “We loved having the Grief Encounter Children’s Choir on GMB this morning.

“They all left really happy with their performance today and we look forward to welcoming them back on to GMB at a later date.”

Do you agree that the decision was heartless? Or think that’s the nature of telly? Leave us a comment on our Facebook page @EntertainmentDailyFix and let us know what you think!