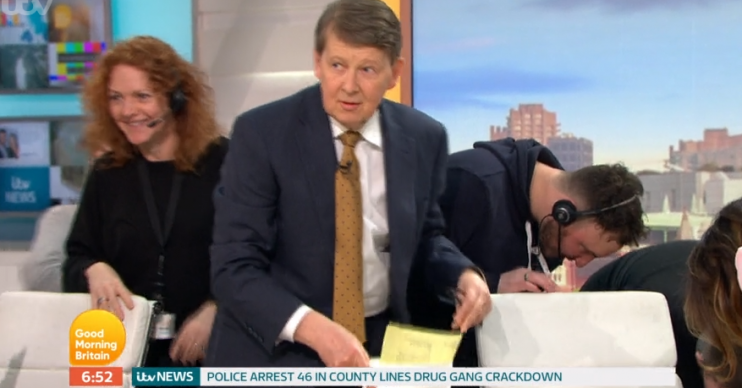 Viewers have loved seeing Bill, who has been covering for Piers Morgan, reunited with Susanna Reid six years since they hosted BBC Breakfast together.

Bill, 64, had to step down from presenting BBC Breakfast in 2016 as he battled prostate cancer, while Susanna quit and moved to ITV in 2014.

After three days presenting GMB with Susanna, the veteran reporter caused chaos when he realised the ear piece was missing during an ad break.

Susanna was left in hysterics as the show played footage of the team searching for the tech set to the Benny Hill theme tune.

Read more: Bill Turnbull makes savage dig at Piers Morgan as he replaces him on GMB

“You know that they call Wednesday hump day. Bill is really having one of those Wednesdays,” she explained to viewers.

“My earpiece popped out in the break and we can’t find it anywhere,” Bill revealed. “So the entire team – thousands of people who work in the studio…”

If you think we’ve staged this we absolutely did not, this is what happened in the break.

Susanna added: “If you think we’ve staged this we absolutely did not, this is what happened in the break.”

The mystery was soon solved when one of the team found the earpiece lodged in Bill’s scripts, which could be seen clearly from the other side of the desk.

Bill and Susanna were reunited on the show on Monday, with the emotional pair hugging as they revealed they were thrilled to be working together again.

‘Susanna is living her best life’ with Bill Turnbull. 🙌

Have you enjoyed watching Bill and Susanna? Visit our Facebook Page @EntertainmentDailyFix and let us know what you think of this story.