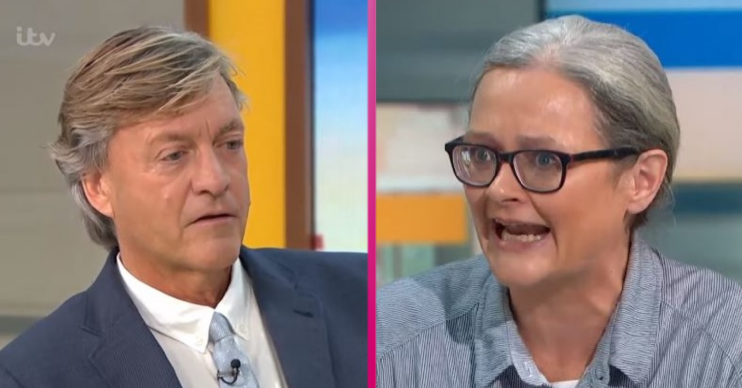 Richard was accused of not asking the "right questions"

However, things turned sour as Tracey clashed with Richard before swearing on the programme.

Richard asked Tracey about the people who can’t get to hospital because of the Insulate Britain protests.

He mentioned one woman who suffered a stroke and became paralysed after she was unable to get to hospital due to blocked roads.

Richard said: “That was a direct response to your protests. What if that woman would have been your mother? Would you still think you’ve done the right thing?”

Tracey replied: “I am finding all of this incredibly challenging, especially being in this studio. What I find myself thinking all the time is why, after six weeks, are our journalists still asking what we’re doing and not the why.

“Is it because you’re heartless and too scared to face the truth, Richard?”

Richard added: “I promise you we’re going to keep the temperature low on this. We’re going to have a proper exchange here.”

He then asked the question again and Tracey said: “If it was my mum of course at the time I would be furious and heartbroken.

“But when you then go home you have to look at the reality. Three to four years to save the future of humanity.

“What you’re doing is framing questions around individuals and not my children’s future.”

As Richard began asking another question, Tracey exclaimed: “All of our children are in trouble and they need us to grow up.”

Later in the discussion, Richard said: “I’m going to try one more time, if you daughter said…”

However, Tracey cut in: “You’re focusing it on the individual. You have to stop this, are you too scared, heartless or are you stupid?”

Later, Ranvir asked: “I’d like to know where you’d take the money from to insulate every single home?”

Tracey replied: “I’d take it from the people going into space on rockets shaped like [bleep].”

Viewers were hugely divided over the interview, with many saying the show shouldn’t have given her airtime.

Another added: “@GMB Please stop giving these insulate Britain idiots the airtime that they clearly crave – give the airtime to somebody more deserving.”

Don’t understand why GMB give these people air time.

When you sit in shock watching another pathetic @InsulateLove interview on @GMB why give them air time when they can’t even answer a question. Pure selfishness in what they do,you will never get British people on side when you do stupid heartless acts of chaos for no benefit.

A third agreed: “When you sit in shock watching another pathetic @InsulateLove interview on @GMB why give them air time when they can’t even answer a question.”

However, others sided with Tracey.

One wrote: “Not that I agree with their methods but Tracey has made a couple of valid points, the right questions aren’t being asked.”

Another said: “Instead of everyone taking the [bleep] out of her and [bleep] her off, why don’t we all put our heads together to try and change climate change?”