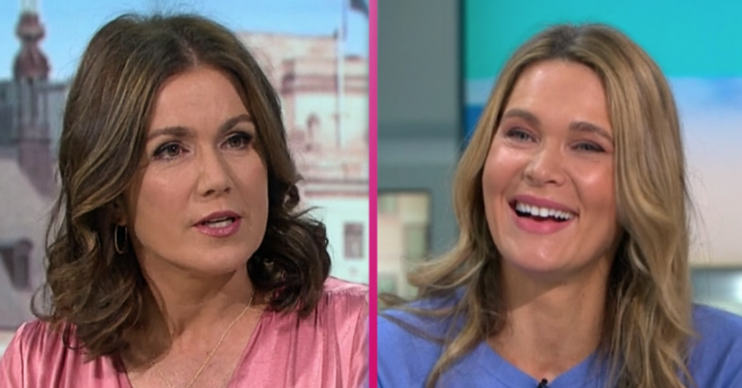 The journalist and author, 45, chatted to host Susanna Reid about her husband and sent a message to show bosses.

Making a surprise appearance on the show to plug her new book, Payday, Celia took questions from host Susanna.

Susanna, who Piers often referred to as his ‘work wife’, introduced Celia as “the real wife”.

During their chat, Celia quipped: “You were a far better wife than I was!

“People were trying to play up the rivalry between me and Susanna, but we were like, ‘no you should hear the conversations we have.'”

Ben Shephard asked if it was all about having balance – having ‘two wives’ – and then Celia responded: “If you can please have him back… he’ll probably storm on any minute any way!

“So I hope you’ve got security primed outside!”

Also on Good Morning Britain today, Susanna asked Celia what Piers is planning to do.

“Obviously I’m in touch with him. He’s my friend. What is he going to do?” the host said.

“That’s a good question,” Celia replied. “He’s got some irons in the fire. I don’t think he’ll be kicking around the house for much longer.”

Susanna then went on to say he was “like a toddler” and she would look after him like “day care” and then hand him back to Celia.

Yesterday, Ofcom ruled that he did not act unlawfully during his last few weeks on GMB as he launched wave after wave of attacks against the Duke and Duchess of Sussex.

And, with Ofcom’s ruling hailed (by Piers) as a “victory for free speech” many fans called for ITV bosses to reinstate him.