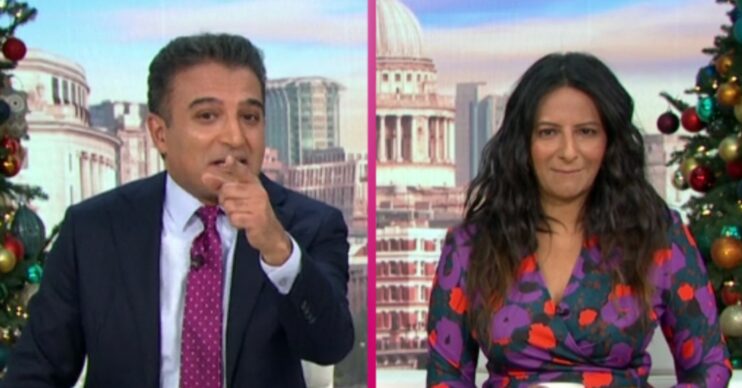 The 47-year-old presenter’s blunder had his co-host Ranvir Singh, and guests, in stitches.

Adil and Ranvir fronted Good Morning Britain yet again today, and the show wasn’t without incident.

Adil’s embarrassing gaffe happened as the Good Morning Britain presenter was urging viewers to sign up for the show’s charity campaign, 1 Million Minutes.

However, rather than saying the word ‘six’, Adil ended up saying ‘sex’ instead!

Addressing the camera, Adil said: “It opens to people in England only if you sign up by going to our website by pledging 180 minutes a week for sex – for six… sex?”

Adil’s co-host Ranvir, 44, was stunned and then started to laugh. An embarrassed Adil immediately protested his innocence.

What was the reaction in the studio?

“It actually says ‘for sex’ in there! It does say that!” he cried, pointing at the autocue.

But Adil was intent on proving his innocence in the matter.

“Can you show them the prompt?” he asked the crew backstage. The camera then showed the offending autocue, which did in fact have the word ‘sex’ on it, rather than six.

Guests on the show teased Adil too, with one asking: “Are you recommending 180 sex minutes a week?”

“3 hours in one go?” another quipped, drawing laughter from hosts Adil and Ranvir.

It wasn’t just embarrassed Adil’s co-host who was cracking up over the presenter’s mistake. Some viewers at home took to social media to poke fun at the blunder.

“Had to laugh!! Adil reading the teleprompter!! 180 minutes of sex! I’m dead!” one viewer wrote.

“Well someone’s getting fired at Good Morning Britain,” another joked.

Some Good Morning Britain viewers, however, were less than impressed with Adil’s embarrassing moment. In fact, some were getting pretty fed up with the presenter.

Read more: GMB viewers all have the same complaint about Adil Ray and Ranvir Singh

“Whoever is in charge of @GMB @ITV should be sacked…” one viewer wrote. “Do they seriously think these presenters can hold a show together…It’s excruciating to watch Adil Ray struggle to read the autocue…”

Adil was spared any further blushes with any more sex jokes when Ranvir told guests “we have a child in the building people”. Adil then continued to host the show, still giggling over his blunder.

Good Morning Britain airs on ITV and ITV Hub at 6am daily.

Did you find Adil’s blunder funny? Leave us a comment on our Facebook page @EntertainmentDailyFix and let us know.