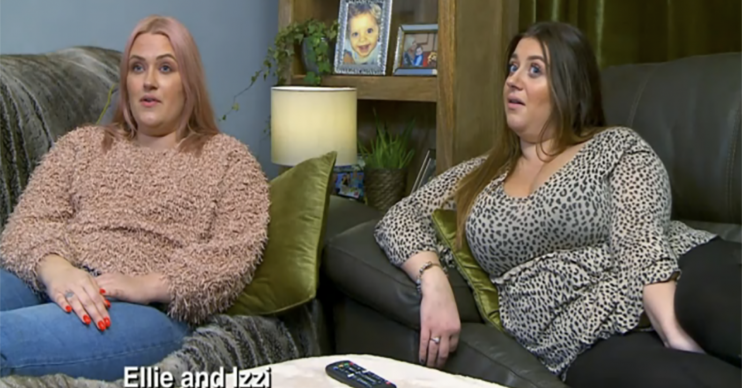 Fans of Gogglebox have expressed their sadness after Izzi Warner was replaced on the show.

Izzi is usually seen chatting about the week’s TV with her sister Ellie during the Channel 4 reality series.

But on Friday night (April 3, 2020), Ellie’s boyfriend Nat was sitting on the couch in place of the bubbly star.

Along Gogglebox bosses did not reference Izzi’s absence, it is believed the coronavirus lockdown is to blame.

The sisters don’t live together, so the current Government restrictions mean they can’t film Gogglebox together.

Gogglebox Izzi has had a sex change and shrunk into the sofa.

Another added: “Izzi is self-isolating. Hence Nat taking her place on tonight’s episode.”

A third joked: “#Gogglebox Izzi has had a sex change and shrunk into the sofa.”

Another said: “Where’s Izzi?” while another added: “I’ve just started watching tonight’s #Gogglebox and omg where is Izzi?

“PLEASE TELL US SHE’S COMING BACK!!”

In February, Izzi and her partner – whose name she keeps private – welcomed her second child into the world.

“We are all totally smitten by her, feeling so blessed and happy, thanks to everyone for all your well wishes.”

However, along with the majority of the nation, Izzi and her little family had gone into lockdown by Mother’s Day (March 22).

Sharing a picture of herself with Bessie and son Bobby, four, she said: “Happy Mother’s Day everyone!

“This isn’t what we had planned for today but there’s no place I’d rather be… and I’m not moving all day.

“Thinking of everyone who isn’t seeing their mum today for whatever reason sending you lots of love.

“Hopefully next Mother’s Day we will be back out celebrating together #mothersday #breakfastinbed #movieday.”

Meanwhile, some of Izzi’s Gogglebox co-stars have come under fire following Friday night’s installment of the show.

Viewers slammed Sophie and Pete for mocking fitness coach Joe Wicks, who has been live-streaming PE classes to the nation.

Pete wrongly accused Joe of “cashing in” on the coronavirus pandemic.

But Joe is giving the £80,000 he has made through advertising straight to the NHS.