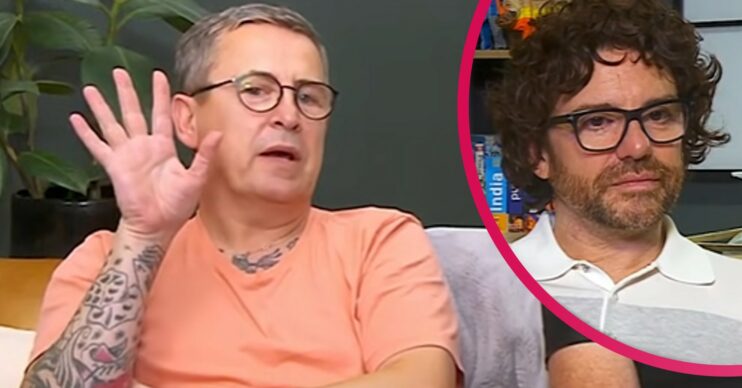 Gogglebox: Stephen Webb pulls out of filming due to Covid

A new series begins this Friday

Gogglebox star Stephen Webb won’t feature in the first episode of the new series after testing positive for Covid-19.

The star shared the news on Instagram in a video alongside his partner, Daniel Lustig.

In the video, Stephen said: “Hello, this is a message to the Gogglebox crew.

“Good luck filming this week. I can’t wait to see you Friday. I need a laugh desperately. We can’t film this week because I’ve got Covid.”

He then captioned the post: “Gogglebox Back this Friday C4 9pm, gutted we won’t be back for episode 1.

“Looking forward to seeing everyone.”

Stephen’s Gogglebox co-stars sent him their support as he recovers from Covid.

Ellie Warner said: “Hope to see you back very soon! Get well soon.”

Dave and Shirley Griffiths added: “It’s a nightmare isn’t stephen, but it’s a break for Daniel.”

Meanwhile, one fan said: “Going to miss you both, feel better soon and can’t wait to see you both back on the TV.”

Another commented: “I hope you are better soon! Can’t wait to watch you guys again.”

A third wrote: “We are so sad not to have your lovely faces this week.

“Hope you’ve been saving up your funnies for next week! Feel better soon.”

On Monday, Stephen shared an update as he and Daniel celebrated Valentine’s Day.

He shared a photo of Daniel cooking in their kitchen.

Fans were quick to gush over the couple’s home, as one said: “What a nice pad. Feel better soon Stephen.”

Another wrote: “Omg love your home.”

Will you miss seeing Stephen and Daniel? Leave us a comment on our Facebook page @EntertainmentDailyFix and let us know.