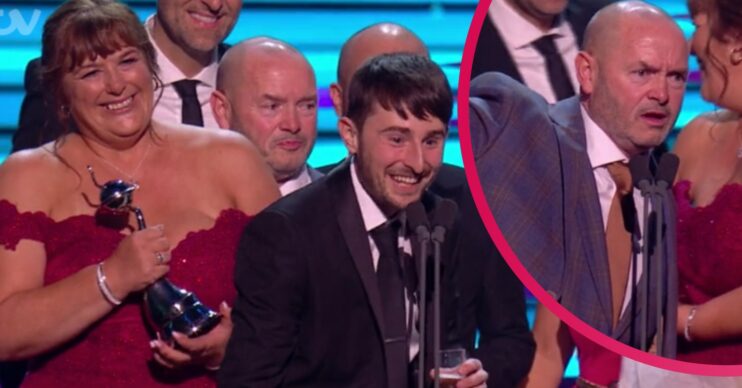 They bagged an award on the night

Gogglebox fans rushed to defend the show’s stars last night (September 9), as they appeared at the NTAs.

The Channel 4 reality series took home the award for Factual Entertainment Programme for the seventh year in a row.

Pete and Sophie Sandiford accepted the gong, alongside co-stars Tom and Julie Malone.

Gogglebox stars appear at the NTAs

The group appeared delighted as they took to the stage with the Gogglebox crew.

Sophie started the speech with a drink in hand, before passing over to older brother Pete.

Waving at the crowd, she said: “Wow, hi everyone – I just want to start by saying thank you so much to everyone who voted…”

However, Pete interrupted: “Your mind’s gone!”

Sophie blamed it on the ‘drink’ as Pete continued by thanking the show’s production.

Julie, who proudly held the award, later took to the mic.

She said: “On a sadder note, we want to dedicate this award to all the people we have lost over the past 18 months, two years.

Her husband also managed to sneak in a quick word.

Rushing to the mic, Tom added: “Hang on, I want to say something for all the lorry drivers out there, you know what I mean?

On Twitter, some pointed out that the cast appeared drunk.

One said: “I love Gogglebox but that was embarrassing #NTAs.”

A third wrote: “I can smell the tequila from here!”

A fourth shared: “Get these off the stage flipping Gogglebox group, how embarrassing #ntas.”

However, others rushed to defend the TV favourites.

Oh my god love that Sophie and Pete have gone and gogglebox won, hope they get absolutely smashed tonight and have the time of their lives – love those guys 🥳😍 #NTAs

How bloody gorgeous do all the @C4Gogglebox families look????? Congrats on the award team, very well deserved.. and big love to our #blackpool lovelies @PeteandSophie @Petesandiford ♥️ #NTAs

One tweeted: “I love this! #Gogglebox #NTAs they are just real people, not Instagram influencers, this is what real life telly contributors used to be like before Instagram.”

A second posted: “How bloody gorgeous do all the @C4Gogglebox families look? Congrats on the award team, very well deserved.”

Another penned: “Oh my god love that Sophie and Pete have gone and Gogglebox won.

“Hope they get absolutely smashed tonight and have the time of their lives. Love those guys.”

Meanwhile, on the red carpet, Pete revealed that he recently welcomed his first child.

His fiancée, Paige Yeomans, gave birth to a baby boy.