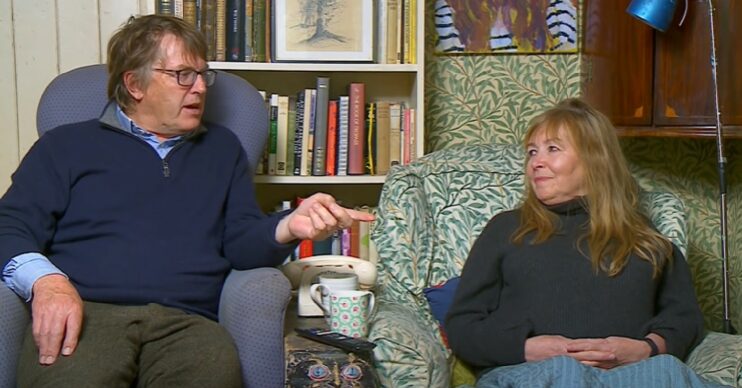 Gogglebox: Mary on how the show ‘saved’ her marriage to husband Giles

They've been together since they were 21

Gogglebox star Mary Killen once revealed how the Channel 4 show ‘saved’ her marriage to husband Giles.

Mary, who’s married to acclaimed artist Giles Wood, revealed that they had become “like passing ships in the night”.

But the programme had a positive effect on their relationship.

What did Mary say about Gogglebox?

The Wiltshire couple, who nickname themselves “Nutty”, have been together since they met as 21 year olds.

But it’s taken Gogglebox to bring them back together.

Speaking to the Daily Star in 2020, Mary said: “Giles and I were like ships that pass in the night. I got up early, he went to bed late and we rarely even ate together.

“Sitting down and watching television reminded us how much we enjoyed the same jokes.”

How did Mary and Giles handle lockdown?

Former model Mary also revealed at the time that lockdown wasn’t a huge hardship for the couple.

She said: “Lockdown wasn’t a great hardship for us, more like an open prison with comfortable beds. But I know a few couples who have split up because they have decided they can’t stand one another.”

The couple first joined the show in 2015 and have since become firm fan favourites.

They call themselves Nutty because they both believe “they’re a bit mad”.

What have the other Gogglebox stars been up to?

This is because he couldn’t film due to getting Covid-19.

He said in a video on Instagram: “Hello, this is a message to the Gogglebox crew.

“Good luck filming this week. I can’t wait to see you Friday. I need a laugh desperately. We can’t film this week because I’ve got Covid.”

Read more: Gogglebox: Stephen Webb pulls out of filming due to Covid

Many fans were gutted as one commented: “Going to miss you both, feel better soon and can’t wait to see you both back on the TV.”