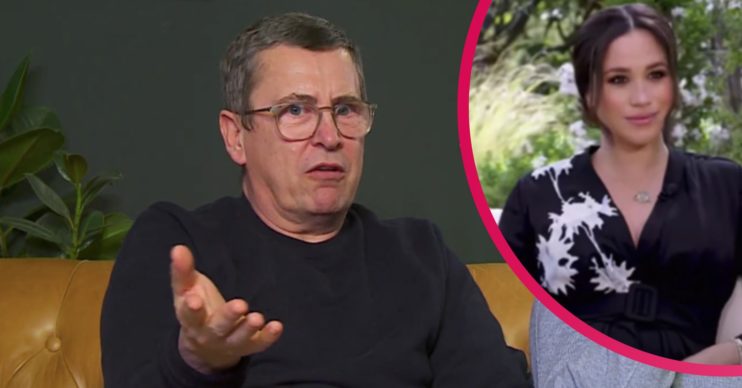 Gogglebox fans were last night left in hysterics after it was suggested Meghan Markle joined the cast of EastEnders.

The stars of the show were watching Meghan and Prince Harry’s explosive Oprah Winfrey interview when the quip was made.

Harry was seen telling Oprah that The Firm had suggested Meghan start acting again to pay for their security costs.

‘Get her a job in EastEnders’

But viewers couldn’t stop laughing at the Goggleboxers’ reactions.

Stephen Webb, 45, mused: “What did they want to do? Get her a part in EastEnders?”

Taking to Twitter, one Gogglebox fan responded: “Get her a part in EastEnders. I’m dead.”

What did they want to do? Get her a part in EastEnders?

Another added: “‘What did they want her to do? Get a part in EastEnders?’ Stephen on Gogglebox. Hilarious!!!”

Gogglebox last night: ‘Stick her in the gift shop’

Stephen wasn’t the only one to leave fans chuckling, either.

Reacting to the suggestion that the former Suits actress get back to work, Sophie remarked: “Stick her in the gift shop while you’re at it.

“You know, 30 hours a week in the gift shop should cover her funds.”

Sophie’s take on the interview also sparked quite the amused reaction on social media.

One fan said: “Quote of the night ‘Stick her in the gift shop’.”

Another added three crying emojis, writing: “30 hours a week in the gift shop!”

What have the royal family said about Harry and Meghan’s interview?

The couple made several explosive claims in their chat with Oprah, including an allegation that there were “concerns” within the family about how dark their son Archie’s skin would be.

A statement was later released on behalf of the Queen, reading: “The whole family is saddened to learn the full extent of how challenging the last few years have been for Harry and Meghan.

“The issues raised, particularly that of race, are concerning. While some recollections may vary, they are taken very seriously and will be addressed by the family privately.”

Harry’s brother, Prince William, meanwhile was asked about the tell-all chat during a public engagement.

William confirmed to reporters that he was yet to speak to Harry but insisted: “We’re very much not a racist family.”

After the interview with Oprah had aired, the US chat show host confirmed Harry had told her that neither the Queen or Prince Philip had made the alleged comment.