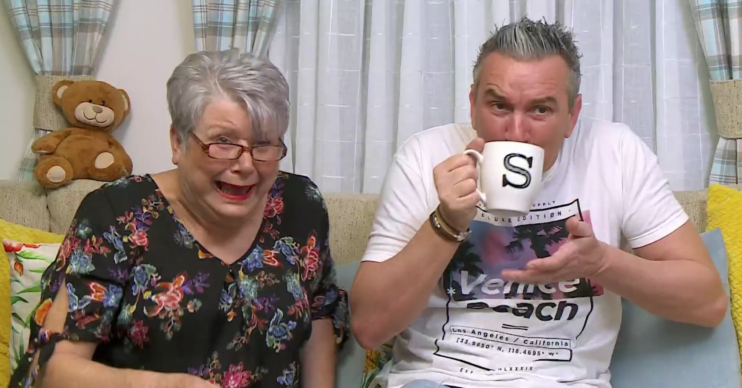 Channel 4 fave was fired up this week

In fact, it seemed she’d been mainlining ‘outrageous’ juice, and it was utterly delightful.

From her filthy desires for Martin Compston – she wants to talk dirty to him (don’t we all) –  to her reaction to a whopper wanger on Naked Attraction… she had viewers belly laughing and slapping the carpet with glee.

Here’s a little recap – and some breathless fans’ hilarious reactions.

So, Jenny and Lee settled on the sofa to watch new ITV drama Our House – which is definitely worth catching if you haven’t seen, btw – and she was particularly excited.

As regular Gogglebox viewers know, Jenny is a big Line of Duty fan and has a particular, let’s say, soft spot for Martin Compston. Her totty, as Lee described him.

Lee thinks it’s a little pervy and told his BFF she is old enough to be his grandmother.

Jenny, 65, protested that she only wanted to talk to him…  adding with perfect comedy timing: “Dirty.”

I think Jenny has a wee crush on @martin_compston #OurHouse #Gogglebox

As Jenny watched on, she cooed: “Ohhh, he’s a lovely man.”

But there was a shock to come as Jenny discovered Martin’s character Bram playing away from home in the garden shed.

“I don’t want anything to put me off you,” she moaned, before adding as she saw him grinding away: “Oh, my, Martin, that’s it now!”

As the drama continued, Bram’s boss made a pass at him, before his estranged wife decided she also wanted a bite, telling him suggestively: “I just thought we could talk.”

“With our tongues,” Jenny added.

She then proceeded to do things with her tongue it’s hard to put into actual words. So let’s get Channel 4’s tweet to do the work…

This is hot on the heels of her wanting Peaky Blinders’ Tommy Shelby to break into a sweat at her house last week as she donned a peaky cap. Might be time to get her patch checked.

Jenny and Lee also got stuck into Celebrity Hunted on Channel 4 and it was pretty heart-in-mouth stuff as Iwan Thomas made it to the finishing line with milliseconds to spare before being captured.

As he dived into the helicopter, he taunted the hunter by pointing at his watch. Jenny mistook this for a ruder message though and shook her own fist as Lee looked on aghast.

Special bonus for Jenny not having a clue who Iwan was too. “I wunt know ‘im from t’ winda cleaner,” she chimed.

As the pair watched Naked Attraction, Jenny leant straight into the TV to have a closer look at the yellow pod, whose nude dweller had quite a penis on him.

“She’s straight in there!” Lee gasped at the show’s thirsty picker. “I would be an’ all, I was thinking the same,” Jenny deadpanned.

Jenny’s having a good look #Gogglebox

Then as the dating hopefuls started to do a belly dance, Lee alluded to them thrashing their tackle around.

Lee then decided to play a quiz with her, explaining. “All you’ve got to do is not say yes or no.”

He then asked: “Do you like going on holiday?”

Jenny hasn’t quite got the hang of the game🤣 #gogglebox

Jenny’s maths let her down as she watched some chocolatier hopefuls on Dragons’ Den asking for £90, ooo in exchange for 9% of their business.

Give this dear woman a damehood!

Leave us a comment on our Facebook page @EntertainmentDailyFix and let us know what you think of Gogglebox star Jenny.