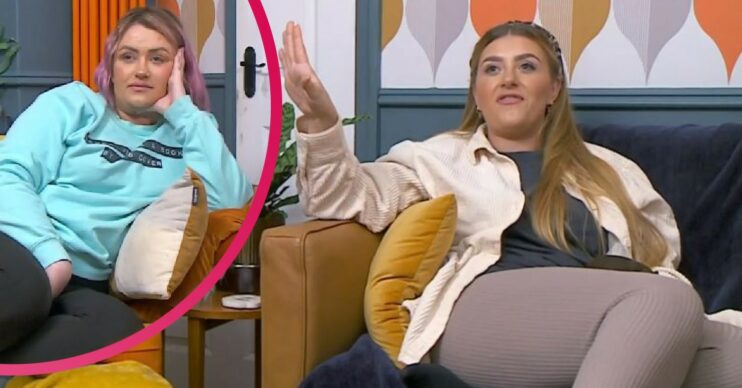 Izzi was back for another episode with sister Ellie

Gogglebox viewers have hit out at Izzi Warner after spotting a habit during last night’s episode.

Izzi and sister Ellie were back for another episode on Friday evening as they sat down and watched this week’s telly.

However, as Ellie and Izzi watched an intense episode of Celebrity Hunted, Izzi was left screeching and viewers weren’t happy.

What happened with Ellie and Izzi on Gogglebox last night?

The sisters watched an episode of Celebrity Hunted in which the hunters were hatching a plan to catch stars Chloe Veitch and The Vivienne.

However, Izzi became slightly high-pitched as the hunters closed in on Chloe and The Vivienne.

Later in the show, Izzi and Ellie watched an episode of Coronation Street.

The episode saw Sarah Platt confront Lydia over whether she’s having an affair with Sarah’s husband Adam.

As Sarah asked Lydia, “Are you having an affair with Adam?” Izzi was heard exclaiming: “What’s she gonna say?”

Lydia replied to Sarah in Corrie: “We never meant for you to get hurt.” However, soap fans know Lydia is lying about having an affair with Adam.

After watching the scene, Izzi said in a high-pitched voice: “She’s pretending that she is and she’s not.”

Viewers took to Twitter to complain about Izzi’s habit.

One person said: “All she does is squeal so annoying.”

Another wrote: “I wish Izzi would stop screaming.”

A third added: “Jesus! Stop squealing like a child.”

Another tweeted: “Time for the sisters to go on #gogglebox way #OTT her voice and facial expressions too much.”

However, others love having Ellie and Izzi on the programme.

After Ellie shared photos of them ahead of last night’s episode, one fan said: “So gorgeous! Loved it tonight as always.”

Read more: Gogglebox star Jenny has viewers in hysterics as she shows off ‘new look’

Another gushed: “Yesss I’m ready, love it. You girls are amazing.”