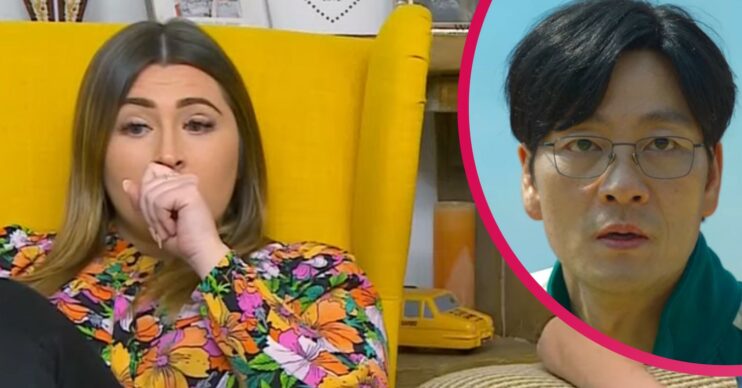 They showed the dubbed version rather than subtitles

The smash-hit Korean drama airs on Netflix in its original language. However, there is the option to watch it dubbed into English.

The Goggleboxers were watching it with English language dubbing – and as a result viewers weren’t impressed.

Why were Gogglebox viewers unhappy over Squid Game?

Those watching at home said they were ‘appalled’ that the Goggleboxers weren’t watching it with subtitles.

They argued the dubbing was awful and the show so much better in its original language.

Fully mad about them watching the dubbed version without original subtitles, this is unacceptable #Gogglebox

Why #Gogglebox is watching #SquidGame with English dubbing is beyond me. Korean is such a beautiful language if you are able to listen to it

NAA why are they watching the dubbed version PLS #Gogglebox

#Gogglebox sorry but this is the first time in hearing squid game dub and I’m appalled.

I’m embarrassed for #Gogglebox that they made them watch Squid Game with the English dub! 🤣🤣🤣

What is Squid Game on Netflix?

Squid Game on Netflix tells the story of a group of contestants who are lured into a competition to compete for a life-changing cash prize.

However, sadly for the 456 players, they quickly learn that there are some deadly consequences to taking part.

The Korean drama launched in late Spetember and was a hit, therefore quickly taking the top spot on the streaming service.

Although Netflix has yet to announce series two, it seems likely it will be commissioned.

What did the Gogglebox cast think of Squid Game?

The Gogglebox cast were stunned as the show unfolded before their eyes.

On screen, those taking part in the ‘game’ were being shot if they moved during the challenge.

Giles and Mary were concerned the main character wasn’t going to make it, meanwhile the Plummer brothers said: “What on God’s green earth did we just watch?”

The show ended with the Siddiqui family admitting they had played a similar game – but no one got shot in their version. Thank goodness!

What else featured on Gogglebox?

Meanwhile, Strictly Come Dancing was a bit hit with the Goggleboxers, as was David Attenborough’s new show, in which the ostrich mating process was shown.