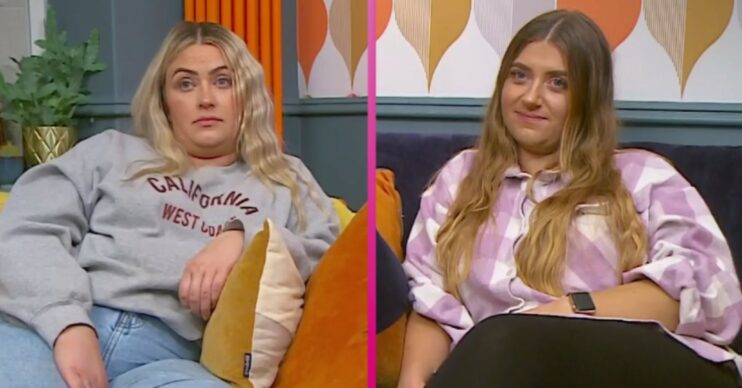 Gogglebox: Ellie and Izzi hailed ‘Northern Goddesses’ after vicious attacks on their appearance

Supporters took down the awful trolls

Ellie and Izzi Warner were defended by Gogglebox fans last night, after being trolled by some nasty viewers.

The reality stars have become firm favourites on the hit Channel 4 series over the years.

But after trolls hit out at their appearances on Friday night (October 1), viewers rushed to their defence.

Ellie and Izzi return to Gogglebox

Appearing from their home in Leeds, the sisters returned to give their opinions on a whole host of new shows.

On the box this time was Strictly Come Dancing, Vigil and Come Dine with Me.

The segment showed an ambulance worker breaking COVID rules to comfort a woman, after her partner passed away at home.

Many of the show’s stars were left in tears over the scene.

Dave told his wife Shirley: “Christ, that’s going above and beyond, isn’t it?”

Just in case you were thinking about getting on a submarine… #Vigil #Gogglebox pic.twitter.com/2CW63iLljR

But while most fans were delighted over the episode of Gogglebox, some took the opportunity to insult Ellie and Izzi‘s weight.

Trolling the pair, one said: “I reckon Ellie & Izzi would eat literally anything. #Gogglebox.”

A second replied to the tweet, saying: “I reckon they already have!”

Ellie and Izzy are Northern Goddesses.

Meanwhile, a third remarked that the pair wouldn’t be able to “fit” inside the submarine from Vigil.

The vile comments didn’t go unnoticed by loyal fans, who rushed to defend the pair.

Following the show, one tweeted: “All these comments about Ellie and Izzi and their weight are horrible to see. It doesn’t effect you, they’re happy with their weight they look amazing. #Gogglebox.”

I’ve not seen anything….. and nor would I want to. Ellie and Izzy are Northern Goddesses. I wish I lived next door to them. Gorgeous, gorgeous women. And much loved 💕

Another said: “Seriously I try so hard not to respond to people telling them to mind their [bleeping] business. So what like!! Same people would have been tweeting #BeKind.”

A third added: “It’s like I always say ‘if you can’t say anything nice don’t say anything at all’. They’ve obviously got a horrible life and see how happy Ellie and Izzi are and don’t like it. Love them.”

A fourth posted: “If you see this girls you are both absolutely stunning, please don’t let the trolls get to you. You’re both beautiful.”

‘Gogglebox is about real people!’

Another shared: “I’ve not seen anything… and nor would I want to. Ellie and Izzi are Northern Goddesses. I wish I lived next door to them. Gorgeous, gorgeous women. And much loved.”

Meanwhile, others pointed out that Gogglebox is all about “real people”.

One said: “It’s good to see people on TV who don’t weigh 100lbs. Who go up and down with their weight like everyone does. I love their humour. They’re gorgeous ladies.”

A second agreed: “Gogglebox is about real, normal people. They shouldn’t be trolled… leave them be.”

The comments follow shortly after viewers were stunned over Izzi’s incredible weight loss.

Read more: How to apply for Gogglebox as makers launch recruitment drive

It came after the much-loved star uploaded a shot of herself with her kids, Bobby and Bessie.

Fans couldn’t help but comment on Izzi’s “tiny” frame and praised the star for her efforts.