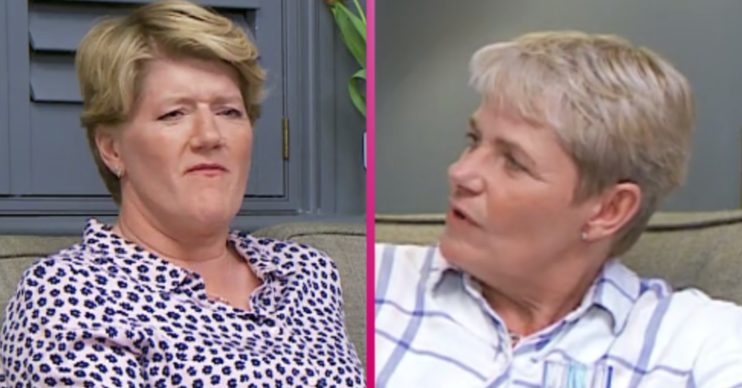 Some thought she should be nicer

Celebrity Gogglebox returned with new cast last night and some viewers were a bit unimpressed with how Clare Balding spoke to her wife Alice Arnold.

Some took to social media to argue that they felt the broadcaster was ‘belittling’ her fellow journalist wife.

In the celebrity special, Clare and Alice sat down to watch recent television highlights.

As The Masked Dancer played, Alice asked if the contestant’s used their ‘real voice’.

Clare replied: “No of course it isn’t their voice. It’s a disguise!”

Later on Clare was later in tears after Supervet Noel Fitzpatrick’s dog was run over and had to have surgery.

Looking away as the dog went into surgery, she told Alice off when she said it was OK to look.

She said: “It’s real. It’s not the same as when we are watching Call The Midwife…”

What are viewers saying about Clare and Alice on Celebrity Gogglebox?

Viewers went to Twitter to argue that Clare may have been a bit too harsh to her spouse.

One viewer tweeted: “Clare Balding is an absolute bell-end to her wife. #CelebrityGogglebox.”

Another viewer argued: “#CelebrityGogglebox wish Clare Balding could be a bit nicer to her wife. Seems to belittle her quite a lot.”

And a third viewer chimed in with: “Clare Balding not coming across as all that pleasant on #CelebrityGogglebox.”

A fourth user also shared: “Clare Balding is a bit mean to the wife #CelebrityGogglebox.”

However, not everyone was so dismissive.

In fact, some viewers said how much they enjoyed seeing the pair on screen.

One viewer claimed: “Clare Balding and her wife are adorable. #CelebrityGogglebox.”

Another said: “I’m obsessed with Clare Balding and her wife on #CelebrityGogglebox.”

A third made an interesting point about how they came across, saying: “I thought at first you seemed a bit irritated with lovely Alice at times.

“But if there was a candid camera on myself and my OH I dread to think what it might see.”

That would doubtless be the case for most couples who are no longer in the saccharine honeymoon phase!

I thought at first you seemed a bit irritated with lovely Alice at times. But if there was a candid camera on myself and my OH I dread to think what it might see.

Who is Clare Balding married to?

So who is Clare’s wife? Alice Arnold is also a journalist and broadcaster, and she married Clare in spring 2015.

But they entered a civil partnership back in 2006.

She’s also a trained actress and a former magistrate. But she is perhaps best known for her hosting roles on BBC Radio 4.

Here she worked for over 20 years, before departing in 2012. Since then she’s continued her work as a journalist writing for the likes of The Guardian and The Daily Telegraph.

What did you think of the new Gogglebox celebrity cast? Let us know on our Facebook page @EntertainmentDailyFix.