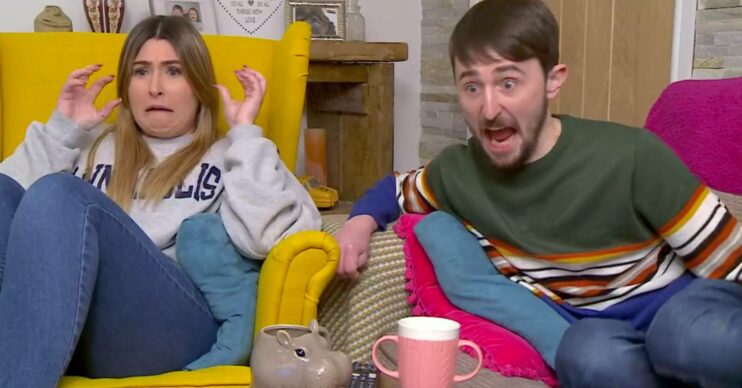 Haunted Hospitals thread went down like a lead balloon

Gogglebox cast members have been accused of ‘playing up to the cameras’ by disgruntled Channel 4 viewers.

The stars of the Friday night series had some big reactions to Haunted Hospitals during last night’s (March 18) episode.

But not everybody watching at home was convinced the show’s couch potato critics were behaving genuinely.

Indeed, some viewers – with no evidence – even claimed the Gogglebox cast were encouraged to ‘act horrified’ over the Discovery+ programme.

The segment began with Lee Riley having a fright before he and Jenny Newby had even watched more than a few moments of Haunted Hospitals.

That’s because Jenny’s mobile went off and broke the tension just as Lee was steeling himself for some scary moments.

Read more: Gogglebox cast: Ages and jobs of all the current critics

However, before long, other Gogglebox stars were also jumping out of their skin at the show.

And one sequence with a ‘possessed’ nurse had several cast members alarmed.

As always, fans watching at home were tweeting along their reactions as the Gogglebox cast reacted themselves.

But multiple viewers were sceptical about how authentic the stars’ fears were.

“Do people really get so animated watching TV? #Gogglebox,” one person asked.

Another claimed: “Nobody overreacts to TV programmes quite like the am-dram Goggleboxers! #Gogglebox.”

And a third moaned: “Can’t stand the fake surprise/screaming on this show #Gogglebox.”

Others even accused show bosses of encouraging the Gogglebox cast to be OTT.

One person imagined a situation: “Gogglebox Director: I want you all to watch this Haunted Hospital show and I’d like you all to scream, jump out of your skin, and generally act horrified (even though it’s corny old [blank])! 5 4 3 2 1 Action… #Gogglebox.”

And someone else claimed: “@Channel4 #Gogglebox Why have the producers got the Goggleboxers shouting?

Read more: Gogglebox: Cast fall-outs, how much they’re paid and what really happens behind the scenes

“Some have never shouted, now nearly all shout. This series has overdone the acting, it’s spoiling the attraction to it

Well, it made us laugh!

Gogglebox next airs on Channel 4 on Friday March 25 at 9pm.