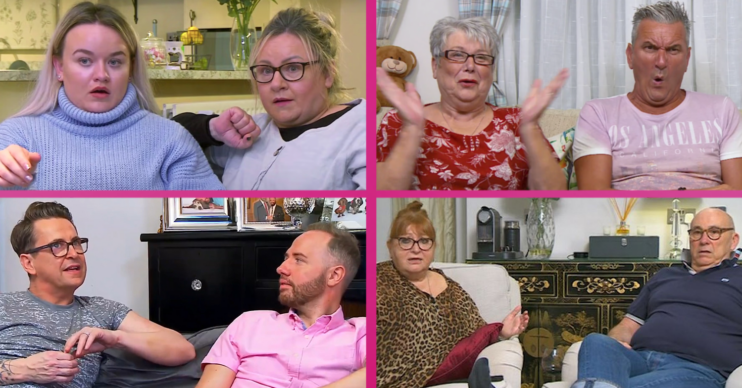 Gogglebox: Cast fall-outs, how much they’re paid and what really happens behind the scenes

You'll never believe what goes on once the cameras are off!

Some of the most legendary families and couples have appeared in the cast of the hit Channel 4 series Gogglebox.

The stars have given us the best laughs and the most iconic lines, as we watch them watch television.

But what happens when the cameras are off?

Here are the most shocking feuds and fallouts that have occurred behind the scenes.

Gogglebox stars Paige and Sally shocked fans last year when they announced they were leaving the show.

She said: “I have made the decision to walk away from Gogglebox.

“It’s been an experience but one I cannot continue with due to long hours of filming, restrictiveness, control of our actions and opinions and zero aftercare support.

Read more: Gogglebox star Jenny has viewers in hysterics as she shows off her ‘new look‘

“But hey who cares about ex cast, their NTA winners.”

A spokesperson for Gogglebox hit back at Paige’s claims in a statement.

“The welfare of contributors – past and present – is of paramount importance and robust protocols are in place to support contributors before, during and after taking part in the series,” they said.

It was then revealed that the real reason the stars left was because of a bitter row off-camera.

Paige ranted about her mother in a now-deleted tweet, saying: “To clarify, people thinking I fell out with my mum over Gogglebox.

“My ‘mum’ is an absolute disgrace who I wish to never speak to again due to a serious family issue NOT about a TV show.”

Chris and Stephen were once one of the most iconic duos on the show, with their witty one-liners and sarcastic quips.

However, after reports of a series of feuds behind the scenes, their friendship finally reached an end and Chris vanished from the Channel 4 series.

He later told the Sunday Mirror that the pair had been preparing to take a short break from the show to focus on a new venture but it fell through.

According to Chris, they were asked to return to the show but Stephen no longer wished to work together.

Chris said: “I spoke to Stephen and his attitude was ‘I’m not sure I can put up with you every other week filming’. Which was a bit of a blow.

“I turned around to him and said: ‘I get the impression that I think a lot more of you than you do of me.’ His reply was: ‘Yeah you’re probably right.'”

Stephen Webb remained part of the Gogglebox cast and now appears with his husband Daniel.

The hilarious Brixton duo, Sandi Bogle and Sandra Martin, were another highlight of the series.

However, the pair were torn apart when Sandra decided to leave the show in 2017.

Rumours of an epic fall out between the pair then started to circulate.

Sandra eventually spoke up and claimed that Sandi was more interested in seeking fame.

Appearing on Lorraine, Sandra said: “My partner Sandi is more interested in that famous life.

“I haven’t spoken to her in a while because she’s very busy being a celebrity. Whereas I’m busy doing my own little things.

“We’re still best friends. She sent me a present for my birthday.”

The pair have allegedly reconciled since their spat but they haven’t been seen together on screen since.

Jay Makin, better known as Silent Jay, proved that you don’t even have to speak to be a hit on the Channel 4 series.

The star appeared on Gogglebox with his girlfriend Eve and her parents, Viv and Ralf.

However, fans were gutted when Jay suddenly left the show in 2015, after the pair split.

Jay and Eve decided to remain friends, but he eventually vanished from the show and was never seen again.

A Channel 4 spokesperson told the Mirror: “It’s with great regret that Silent Jay is no longer in this series of Gogglebox.

“He has been an excellent contributor to Gogglebox, and we are very grateful for all he has given to the show.”

How much do Gogglebox cast members get paid?

There are plenty of rumours doing the rounds on this one.

Viewers have speculated that the stars get paid in takeaways and snacks, as they always seem to be eating – or that they get paid in dogs, as every family seems to have one.

However, we can confirm that the Gogglebox cast – including fan favourites like Lee Riley and Jenny Newby – get paid in cold hard cash.

The Sun revealed that each Gogglebox family gets paid £1,500 a month. They then share that out however they see fit.

The rumour about the takeaway turns out to be true. They’re allowed to choose a free takeaway to keep them fuelled during filming.

On the subject of which, each family spends 12 hours per week watching the box for Gogglebox.

This is split into two six-hour shifts, so they can fit in day jobs around their telly commitments.